Proportion of vaccinees with 50% plaque reduction neutralization test (PRNT50) titers ≥10 against three or more dengue virus serotype at the end of the original clinical trials (6–12 months post-vaccination) and in February 2001 (3–8 years after vaccination). 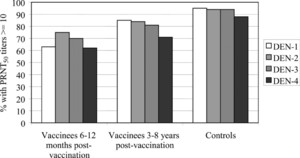 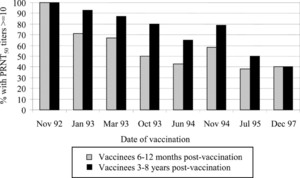 From 1992 to 1997, 140 Thai children 4–15 years of age received an investigational live attenuated tetravalent dengue vaccine (LATDV). These children were contacted 3–8 years later in 2001 to assess humoral immunity and investigate whether they were subsequently at higher risk of developing severe dengue. One hundred thirteen were successfully contacted and participated in this retrospective cohort study with two age- and address-matched controls per vaccinee. The number of vaccinated subjects with neutralizing antibodies increased compared with 3–8 years earlier, which was probably due to subsequent wild-type dengue infections. There were no excess hospitalizations for clinically suspected dengue fever (DF) or dengue hemorrhagic fever (DHF) in vaccinees (one with DF and three with DHF) compared with controls (14 with DHF). Results suggest that preexisting dengue antibodies induced by LATDV do not enhance dengue illness, and the use of the vaccine in a dengue-endemic area is safe.

Dengue infections due to dengue virus serotypes 1–4 are the most important emergent arboviral disease in humans in terms of both morbidity and mortality.1 Illness is typically self-limited, but life-threatening and fatal dengue hemorrhagic fever (DHF) and dengue shock syndrome (DSS) can complicate infection, especially in children.2 Only symptomatic treatments are available, and although vaccines are being developed, none are currently available. Infection with one serotype stimulates neutralizing antibodies conferring serotype-specific protective immunity, but little or no cross-protection against heterotypic serotypes. The pathogenesis of severe disease is not fully understood and multiple factors may be implicated. It is thought that infection with dengue virus sensitizes the individual so that secondary infection with a heterotypic virus will more frequently result in severe illness.1,3,4 During secondary infection, immune complexes formed with cross-reactive antibodies or with sub-neutralizing amounts of serotype-specific antibody may target monocytes for Fc receptor–facilitated viral replication.3 This antibody-dependent enhancement (ADE) phenomenon implies that a vaccine must induce protection simultaneously against all four dengue virus serotypes.

The first experimental dengue vaccines developed were live attenuated tetravalent dengue vaccines (LATDVs). Between 1992 and 1997, 140 flavivirus-seronegative Thai children 4–15 years of age received a dose of one of several formulations of LATDV.5 To investigate whether vaccination is a predisposing risk factor for severe dengue upon subsequent natural infection, study subjects were re-contacted in February 2001 (3–8 years after the original vaccination) and invited to participate in a retrospective cohort study. The objectives were to evaluate humoral immunity 3–8 years after single immunization with LATDV, retrospectively describe severe dengue illnesses in vaccine recipients in comparison with age- and address-matched controls, and evaluate the ADE of dengue infection by sera from vaccinees and controls. Having reported the results of the latter objective in 2004,6 we report the results of the two other objectives. Due to the low number of dengue cases expected, analyses were purely descriptive, without formal statistical analysis. The study was conducted in accordance with the principals of the declaration of Helsinki and guidelines for good epidemiologic practice. The ethics committee of the Thai Ministry of Public Health reviewed and approved the protocol. All subjects or their parents gave their written informed consent before being included in the study.

Of the 140 children vaccinated with LATDV between 1992 and 1997, we were able to contact 120, of whom 113 participated in the present study. Of the remaining 20, 3 died (2 in car accidents and 1 by drowning). No information was available for the other 17. For each vaccinated subject included, we recruited two age-matched controls (± 1 year) selected from the same classroom or village. Recent migrants or individuals with immunodeficiencies or recent blood transfusions were not included.

In February 2001, vaccinees was 15.8 ± 2.9 years of age (mean ± SD) and a mean duration of 6.8 years had elapsed since vaccination (Table 1). A questionnaire was used to obtain information from subjects and parents about hospitalizations for dengue or other reasons occurring since the vaccination; hospital records were then sought. Control subjects and their parents were questioned in the same way as vaccinees, where the period for each control was defined by the duration since vaccination of the vaccinee to whom they were matched. Blood was drawn for antibody assessment.

The proportion of vaccinees with 50% plaque reduction neutralizing (PRNT50) antibodies against dengue 1–4 viruses was higher in 2001 compared with subjects 6–12 months post-vaccination, but lower than that of controls (Figure 1). Of the 42 subjects who were seronegative for dengue-1 virus 6–12 months after vaccination (defined as a PRNT50 titer <10), 30 of 42 had seroconverted by 2001. For dengue-2, -3, and -4 viruses, the seroconversion rate in initially seronegative subjects was, 17 of 28, 21 of 34, and 20 of 43, respectively. Increased neutralizing responses 3–8 years after vaccination were observed irrespectively of which LATDV formulation had been received (Figure 2).

There were 71 hospitalizations: 26 vaccinees and 45 controls. Of these, 18 were reported as being due to dengue and met the World Health Organization clinical criteria for dengue fever (DF) or DHF, but only 1 (in a control subject) was laboratory confirmed.2 Among the 113 vaccinees, 4 hospitalizations due to dengue (3.5%) were reported: 1 with DF and 3 with DHF (Table 1). In comparison, there were 14 DHF cases reported in the 226 controls (6.2%). There was no apparent relationship between hospitalization and either age, Japanese encephalitis (JE) vaccination status, sex (Table 1), or vaccine formulation. Although all four hospitalized cases in vaccinees were males and the JE vaccination rate was higher in hospitalized cases than in those who were not hospitalized for dengue, these trends were not significant and were observed in both dengue vaccinees and controls. There is no plausible explanation for these findings and it is likely that this is a chance effect due to the low number of hospitalized cases reported.

To our knowledge, this study provides the first data on long-term humoral immunity and occurrence of clinically suspected DF and DHF in children vaccinated with live attenuated monovalent, multivalent, or tetravalent dengue vaccines. This study had several limitations. It was a retrospective study with a small sample size and we have no results for 27 of the 140 subjects initially vaccinated. Additionally, 10 different vaccine formulations were used in the initial studies and only 1 dose was given, whereas our group has shown that at least 2 doses of LATDV are required for satisfactory priming against all four serotypes.7 The results suggest there was no excess DF/DHF in vaccinees, despite the fact that the population was regularly exposed to all four dengue serotypes (attested to by the high number of seroconversions in the previously dengue-naive population). The higher number of controls with neutralizing antibodies in comparison with vaccinees is probably explained by the selection of flavivirus-naive subjects in the original vaccine trials. These results are reassuring, especially with the concurrent demonstration that neutralizing responses induced by LATDV are not associated with high levels of ADE.6 Moreover, a recent prospective study demonstrated that ADE activity in preillness plasma did not predict subsequent disease severity in a cohort of Thai children in whom sequential dengue infections were detected.8 These cumulative data imply that other determinants may be important in the pathogenesis of DHF/DSS and support the use of live attenuated dengue vaccines in children.

Demographic characteristics of the study population and the hospitalized dengue cases