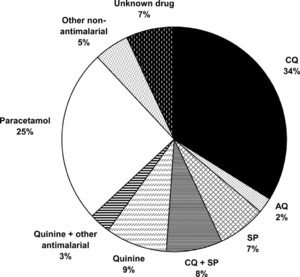 PREVENTION AND TREATMENT STRATEGIES USED FOR THE COMMUNITY MANAGEMENT OF CHILDHOOD FEVER IN KAMPALA, UGANDA

To assess malaria-related prevention and treatment strategies in an urban parish of Kampala, Uganda, a questionnaire was administered to 339 randomly selected primary caregivers of children 1–10 years of age. Our study population was relatively stable and well educated, with better access to health services than many in Africa. Ownership of an insecticide-treated net (ITN) was reported by 11% of households and was predicted only by greater household wealth (highest quartile versus lowest quartile: odds ratio [OR] 21.8; 95% confidence interval [CI], 2.74–173). Among women, 5% reported use of an ITN and 11% used intermittent preventive therapy (IPT) during their last pregnancy. Use of appropriate IPT during pregnancy was predicted only by completion of secondary education or higher (OR, 2.87; 95% CI, 1.13–7.21). Children of 123 (36%) caregivers had experienced an episode of fever in the past 2 weeks. Of these, 22% received an anti-malarial that could be considered “adequate” (combination therapy or quinine). Only 1% of febrile children received adequate treatment at the correct dose within 24 hours of onset of fever. The only independent predictor of treatment with an adequate anti-malarial was accessing a clinic or hospital as the first source of care. In this urban area, use of appropriate malaria control measures occurs uncommonly.