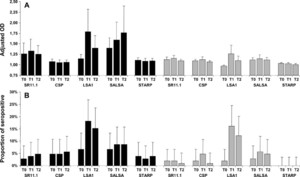 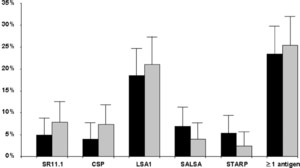 Protective devices against vectors are used by travelers in malaria-endemic areas but their efficacy for protection against mosquitoes has rarely been evaluated. The level of exposure to malaria transmission of 205 soldiers deployed in Africa and the efficacy of their anti-vector prophylaxis was evaluated by comparison of their IgM and IgG responses against five pre-erythrocytic Plasmodium falciparum antigens (circumsporozoite protein, sporozoite threonine- and asparagine-rich protein, sporozoite- and liver-stage antigen, liver stage antigen 1, and SR11.1) before and at the end of their deployment, and three months after returning to France for 106 of these soldiers. The immune responses increased significantly during the mission in 35% (95% confidence interval = 28–42%) of the individuals. The permanent use of insecticide-treated bed nets and long-sleeve battle dress at night were associated with protective efficacy. The analysis of these antibody responses was sensitive enough to evaluate exposure to malaria transmission and the efficacy of anti-vector devices in travelers using antimalarial chemoprophylaxis.