Plasmodium falciparum prevalence of infection by age. Error bars show 95% confidence intervals (CIs). One-year-old children were included in this analysis since the data were stratified by single year of age. At baseline, the sample of one-year-old children was disproportionately small, as reflected in the wide CI. Prevalence shown as a proportion. 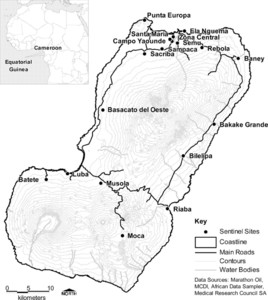 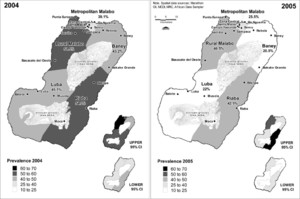 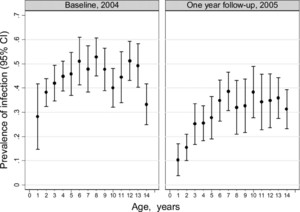 REDUCTION IN INFECTION WITH PLASMODIUM FALCIPARUM ONE YEAR AFTER THE INTRODUCTION OF MALARIA CONTROL INTERVENTIONS ON BIOKO ISLAND, EQUATORIAL GUINEA

The Bioko Island Malaria Control Project was initiated in 2003 to substantially reduce malaria on the island of Bioko in Equatorial Guinea. The intervention consisted of generalized indoor residual spraying during the first year of the project. Case management and related measures were introduced during the second year. Two large household and parasitemia surveys of children 2 to < 15 years of age were carried out in 2004 and 2005, respectively, to assess the effect of the intervention after the first year. Patient records were collected retrospectively from one district hospital and analyzed for a comparison of pre-intervention and post-intervention periods. Overall mean prevalence of P. falciparum infection reduced from 46% (95% confidence interval [CI] = 40–51%) at baseline in 2004 to 31% (95% CI = 24–40%) in 2005 (P < 0.001). When the 12-month pre-intervention period was compared with the 12-month post-intervention period, there was a modest but statistically significant reduction in the number of malaria cases among hospital patients.