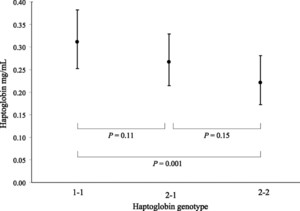 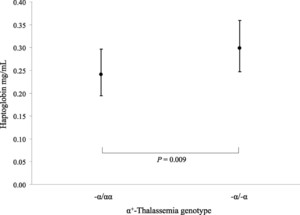 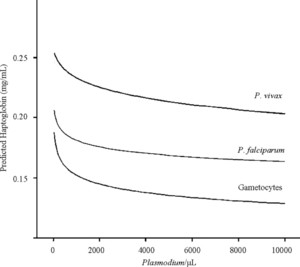 Haptoglobin (Hp) is an acute phase protein that removes free hemoglobin (Hb) released during hemolysis. Hp has also been shown to be toxic for malaria parasites. α+-Thalassemia is a hemoglobinopathy that results in subclinical hemolytic anemia. α+-Thassemia homozygosity confers protection against severe malarial disease by an as yet unidentified mechanism. Hp levels were measured in a serial cross-sectional survey of children in Madang Province, Papua New Guinea (PNG). Hp levels were related to age, Hp genotype, Hb levels, parasitemia, splenomegaly, and α+-thalassemia genotype. Surprisingly, children who were homozygous for α+ -thalassemia had significantly higher levels of Hp than did heterozygotes, after controlling for relevant confounders. We suggest that this is the result of either reduced mean cell Hb associated with α+ -thalassemia homozygosity or an elevated IL-6–dependent acute phase response.