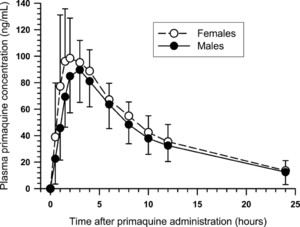 LACK OF SEX EFFECT ON THE PHARMACOKINETICS OF PRIMAQUINE

Plasmodium vivax affects about 100 million people each year in tropical areas and is an important cause of morbidity in the Americas, the Western Pacific, and Asia.1 Primaquine (Weifa A.S., Kragero, Norway), an 8-aminoquinoline, is the only drug available for radical cure and terminal prophylaxis of P. vivax. It is also a highly effective prophylactic agent against both falciparum and vivax malaria at a daily adult dose of 30 mg.2 The main side effects associated with primaquine use are gastrointestinal disturbances such as nausea and abdominal pain. Despite considerable clinical experience with primaquine, little data are available on whether there are sex differences in the tolerability and pharmacokinetics of primaquine.

Nasveld and others3 reported a higher prevalence of gastrointestinal disturbances in female than male Australian Defense Force personnel on terminal prophylaxis with primaquine. The higher prevalence of gastrointestinal disturbances reported in the Australian women may have been associated with higher plasma primaquine concentrations in the women compared with levels in men. Although the kinetics of primaquine have been well defined in male subjects,4–8 only one study has examined the pharmacokinetics of primaquine in female subjects.9 Thai women were found to have significantly higher maximum concentrations of primaquine in blood and plasma than in Thai men.

Since the Thai study revealed sex differences in the kinetics of primaquine, we determined the pharmacokinetics of primaquine at the recommended dose of 30 mg in healthy Australian female and male volunteers to ascertain whether sex differences affect the disposition of the drug. Based on the Thai study, we expected a 45% difference in the area under the curve (AUC) of primaquine between men and women. Assuming an SD of the difference of 30%, a power of 80%, and a significance level of 0.05, we needed nine men and nine women to detect this major difference. Eighteen healthy Australian Defense Force personnel (nine men and nine women) were recruited into the study. The glucose-6-phosphate dehydrogenase normal volunteers were judged healthy based on medical history, clinical examination, and routine laboratory testing (hematology and biochemistry). Ethical approval for the study was obtained from the Australian Defense Human Research Ethics Committee. Informed consent was obtained from all volunteers.

A single oral dose (30 mg) of primaquine (four primaquine diphosphate tablets of 7.5-mg base per tablet; Boucher & Muir Pty, Crows Nest, NSW, Australia) was given after a full breakfast (toast, spreads, bacon, and eggs) containing no less than 30 g of fat. During the first 12 hours after drug administration, an indwelling cannula was inserted into a forearm vein and kept patent with heparinized saline. Subsequent blood samples were collected by venepuncture into heparinized tubes. Serial venous blood samples (7 mL) were collected at 0.5, 1, 1.5, 2, 3, 4, 6, 8, 10, 12, and 24 hours.

Plasma samples were obtained from the venous blood after centrifugation (1,500g for 15 minutes) and stored at −80°C until analyzed. Plasma concentrations of primaquine were measured by high-performance liquid chromatography using the method of Mihaly and others.4 The inter-assay coefficients of variation for primaquine were 17.8% and 3.3% at 5 (N = 9) and 100 ng/mL (N = 9), respectively. The limit of quantitation of primaquine was 5 ng/mL using 0.5 mL of plasma. Non-compartmental analysis was carried out to estimate the pharmacokinetic parameters of primaquine.10 The AUC was calculated by the linear trapezoidal method, with extrapolation to infinity. Normally distributed data are expressed as mean values ± SD, with 95% confidence intervals (CIs) of mean differences for kinetic parameters between the sexes. Statistical comparisons were made using the Student unpaired t test, accepting a difference at the 5% level as significant.

In conclusion, this study showed that the disposition and clearance of primaquine is comparable between healthy male and female volunteers after a single oral dose of primaquine. The clinical relevance of such findings would suggest that sex does not have to be taken into account as a factor when prescribing primaquine to young healthy people. However, further studies are required to determine whether the kinetics of primaquine and adverse events differ between the sexes when given the recommended maintenance dose of 30 mg of primaquine daily over a period of time.

The pharmacokinetics of primaquine in healthy male and female Australian volunteers