Number of newly acquired, lost, or persisting infections per person-interval by age group, determined with (a) RFLP and (b) GeneScan.

Frequencies of transition types by survey interval determined by (a) RFLP or (b) GeneScan.

Illustration of detection limits of two methods, PCR-RFLP (R) and GeneScan (G), and the implication for detection of infections with three different density profiles, A, B, and C. 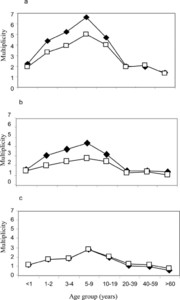 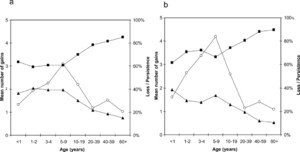 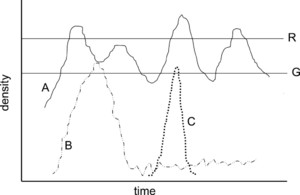 Parameters describing the infection dynamics of Plasmodium falciparum are important determinants of the potential impact of interventions and are potential outcome measurements for malaria intervention trials. Low parasite densities, periodic sequestration of parasites, and the presence of multiple concurrent infections make it essential to use molecular techniques to estimate the force of infection and duration of infections in endemic areas. We now compare two approaches for tracking individual genotypes of the highly polymorphic merozoite surface protein 2: 1) fluorescence-labeled polymerase chain reaction (PCR) and GeneScan-sizing and 2) restriction fragment length polymorphism (RFLP). We analyze samples from a longitudinal field study in Ghana and use statistical approaches that allow for imperfect detectability. The two methods gave broadly similar estimates of parasite dynamics, but GeneScan is more precise and can achieve a higher throughput. The analysis of parasite dynamics indicated an average duration of infection of 210 days by GeneScan versus 152 days by PCR-RFLP in the study population in Kassena-Nankana, Northern Ghana. This reflects the good performance of GeneScan-based genotyping for studies of parasite infection dynamics.