Location of study sites in south central Panama with a digital elevation model as a background. Shaded contours start at 200 m above sea level.

Steps in preparation of satellite imagery for use in analyses and modeling.

Proportion of Z. brevicauda individuals captured at each site.

Relationships between modeled dominance in the rodent community (L. adspersus and Z. brevicauda) and topographic slope at study sites (%).

The spatial representation of community dominance model for (A) L. adspersus and (B) Z. brevicauda for Azuero Peninsula, Panama. Markers indicate the location of study sites. In both images individual pixels are 1 × 1 km. 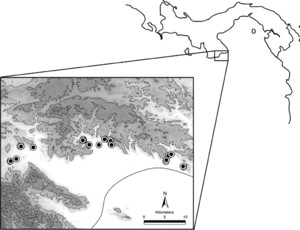 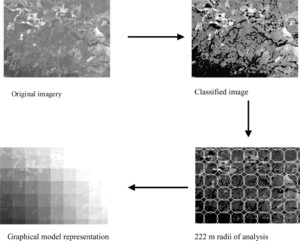 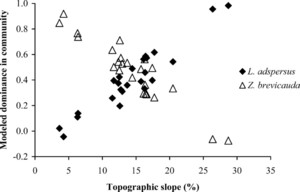 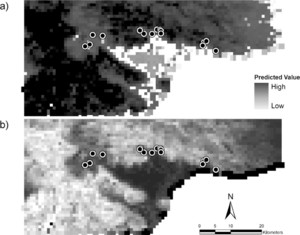 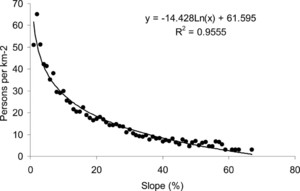 Habitat fragmentation commonly influences distribution of zoonotic disease reservoirs. In Panama, populations of rodent hosts of hantaviruses are favored by small habitat fragments isolated by agricultural lands. We expected a similar relationship between landscape characteristics and host distribution at fine geographical scales in southern Panama. The relative abundance of Zygodontomys brevicauda, the primary host for “Calabazo” virus, and other rodents was assessed at 24 sites within the Azuero Peninsula. We used satellite imagery to produce several spatial variables that described landscape; however, only slope was consistently related to abundances of the two most dominant rodent species. Using regression, we constructed a spatial model of areas of Z. brevicauda dominance, which in turn relates to higher infection rates. The model predicts highest abundances of Z. brevicauda in flat areas, where humans also dominate. These predictions have important ecological and conservation implications that associate diversity loss, topography, and human land use.