Transmission electron micrographs of ultrathin liver sections from PIRV-infected hamsters. (A and B) Pirital virions (arrows) are observed in the hepatocytes and in the junctions between hepatocytes. Original magnification, ×47,000 (A) and ×62,700 (B). (C) Several vesicles separate from the endoplasmic reticulum of an infected cell (*), and a whole phagolysome is visible in the section (arrow). Original magnification, ×14,100. 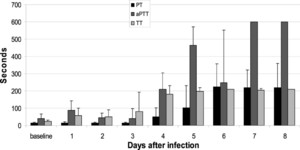 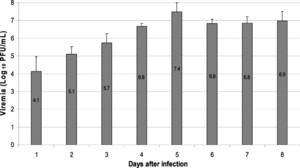 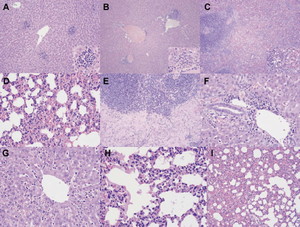 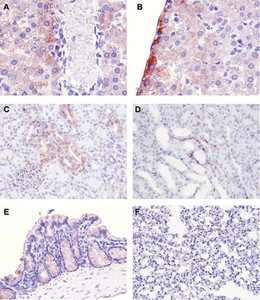 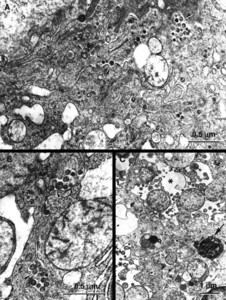 The clinical laboratory, virologic, and pathologic changes occurring in hamsters after infection with Pirital virus (Arenaviridae) are described. Pirital virus infection in the hamsters was characterized by high titered viremia, leukocytosis, coagulopathy, pulmonary hemorrhage and edema, hepatocellular and splenic necrosis, and marked elevation of serum transaminase levels. All of the animals died within 9 days. The clinical and histopathological findings in the Pirital virus–infected hamsters were very similar to those reported in severe human cases of Lassa fever, suggesting that this new animal model could serve as a low-cost and relatively safe alternative for studying the pathogenesis and therapy of Lassa fever.