The distribution of reported equine cases of West Nile encephalomyelitis in Texas during 2002, based on the estimated date of initial case report by county and estimated using a Gaussian kriging model (negget = 160, range = 3.3, sill = 800). This figure appears in color at www.ajtmh.org.

Incidences (cases per 1,000 horses) of equine WNV encephalomyelitis, Texas, 2002, based on number of cases reported per county, county equine population during 2002, and county centroids. Incidence risk was estimated using a Gaussian kriging model (nugget = 45, range = 8.0, sill = 63). For comparison, the estimated distribution of horses in Texas is shown. This figure appears in color at www.ajtmh.org. 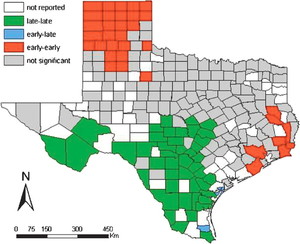 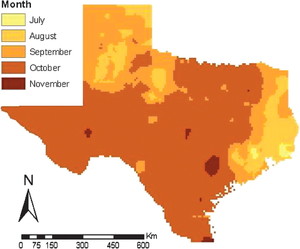 Using reports of clinical West Nile virus (WNV) encephalomyelitis in Texas equids during 2002, the distribution of disease was analyzed using cluster statistics and spatial modeling to develop hypotheses of disease spread during the first year of its detection. Significant (P < 0.05) clusters of cases reported early during the outbreak were identified in east, northcentral, and north Texas, and significant (P < 0.05) clusters late during the outbreak were detected in central, south, and west Texas. Two counties on the south Texas coast first reported disease significantly (P < 0.05) earlier than their 10 nearest neighboring counties. The estimated incidence of disease was greatest in the high plains of north Texas and in northcentral Texas. Higher rates were also estimated in eastern and southern areas of the Gulf Coast. The spatial and temporal distribution observed indicates that the equine WNV epidemic began in two parts of Texas and spread elsewhere throughout the state. The mechanism of introduction and spread remains speculative.