Daily mean + SD counts of neutrophils, lymphocytes, and monocytes in the blood of hamsters following infection with yellow fever virus. 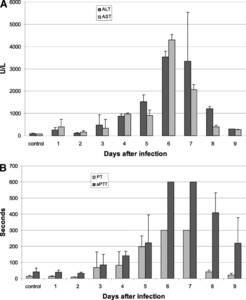 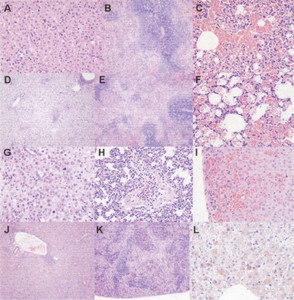 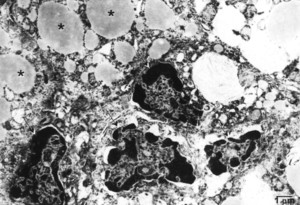 Using a recently described hamster model of yellow fever (YF), we compared the hematologic and clinical chemistry changes that occur in blood with the histopathologic alternations observed in liver and other organs. Inflammatory foci and necroapoptotic hepatocytes were first observed in the liver three days after YF infection. This was accompanied by a rapid increase in serum transaminase and bilirubin values, elevation of prothrombin times, thrombocytopenia, and leukocytosis. Maximum liver pathology was observed on the sixth and seventh days post-infection; this corresponded to the peak alternations in clinical chemistry and hematologic values. In surviving hamsters, regenerating hepatocytes began to appear on the eighth day post-infection; this was accompanied by a corresponding return to baseline levels of most of the aforementioned clinical laboratory values. The histopathologic and clinical laboratory findings in the hamster model were very similar to those observed in severe human cases of YF. These results provide further validation of the utility of the hamster model for studying the pathogenesis and treatment of YF.