IHA titer for 2,214 children living in meloioidosis-endemic northeast Thailand. The number of children tested in each year group is shown. None of the children were known to have melioidosis. 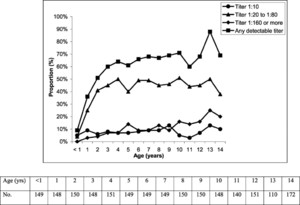 A cross-sectional serological survey of 2,214 children living in northeast Thailand was conducted to define the antibody response to Burkholderia pseudomallei from birth to 14 years. There was a sharp rise in detectable antibodies from birth to 4 years followed by reactivity in approximately 60–70% of children thereafter.

Burkholderia pseudomallei is a soil saprophyte and the cause of melioidosis.1 This organism exists in soil and water in melioidosis-endemic regions of the tropics, and infection is acquired through bacterial inoculation, inhalation, and aspiration. Clinical manifestations of infection are very broad ranging, but the most frequent presentation is that of a septicemic illness associated with bacterial dissemination to distant sites.1 One fifth of cases in northeast Thailand occur in children. Overall mortality is 50% in northeast Thailand (35% in children)1 and 19% in Australia.2

Children have extensive contact with B. pseudomallei in endemic areas. Two previous studies have examined the antibody response to B. pseudomallei during childhood in melioidosis-endemic northeast Thailand; testing was performed using the indirect hemagglutination assay (IHA).3,4 Of 295 children 1 day to 15 years of age who presented to a well baby clinic or were admitted to hospital for illnesses excluding melioidosis, 83% had an IHA titer of 1:10 or more, and 7.4% had a titer of 1:160 or greater.3 This indicates widespread exposure of children but suggests that a titer of ≥ 1:160 (a titer commonly used in Thailand to support a diagnosis of melioidosis in patients with clinical features consistent with this diagnosis) is relatively uncommon. However, children 10 years of age numbered only 46 and were grouped together. A second larger study of 1,000 children presenting to pediatric wards who did not have melioidosis reported a detectable titer in 12% of children ≤ 6 months of age, with a linear increase to reach a plateau of 80% by 4 years of age.4 The proportion of children with IHA titers of 1:160 or greater rose from 2–3% in children under the age of 1 year to 25% in the 10- to 15-year age group. Again, children between 10 and 15 years of age were grouped and were under-represented in that they made up only 17% of the population. We propose that equal numbers of children in each year group are required to define more accurately the immune response to B. pseudomallei during childhood. The purpose of this study was to perform the IHA in a large cohort of children in which each year was equally represented.

A prospective, cross-sectional study was conducted between October 2004 and September 2005, during which unselected consecutive serum samples from children between birth and 14 years of age were collected from the biochemistry departments of Sappasithiprasong Hospital and Udon Thani Hospital in northeast Thailand. Approximately 80% of residents belong to rice farming families. Blood samples were derived from out- and in-patients from all departments, where duplicate samples from the same patient were excluded. An anonymous database was used to record sex and age. Children who were known from the request form to have a diagnosis of melioidosis were excluded. Target sample numbers were approximately 70 samples in each year group for each of the two centers. Collection ceased for a given year group once sufficient samples had been identified. Serum samples were subsequently tested in random order. The presence and titer of antibodies to B. pseudomallei were defined using the IHA as previously described,5 using pooled antigens prepared from B. pseudomallei clinical isolates 199a and 207a cultured from patients with melioidosis in northeast Thailand. Ethical approval for this study was obtained from The Faculty of Tropical Medicine, Mahidol University, Thailand, and the Oxford Tropical Research Ethics Committee.

Sera were obtained from 2,214 children, of whom 1,266 (57%) were boys. The number collected per year group is shown in Figure 1. The proportion of children with any detectable titer rose sharply in the first 4 years of life (Figure 1). The proportion with detectable titers showed little variation overall between the age of 4 and 14 years, ranging from 60% to 71% positive, with the exception of the 11- and 13-year age groups. The proportion of children with a titer of ≥ 1:160 rose with increasing years; 9% of those 9 years of age had a titer of ≥ 1:160, rising to about one fifth of children between 13 and 14 years of age. Girls had a significantly higher IHA titer than boys; the median (interquartile range) was 1:20 (0–1:80) for girls and 1:10 (0–1:40) for boys (P = 0.0001). This was noted overall across the age spectrum and for different titers.

These data confirm previous findings that an antibody response occurs early in childhood in northeast Thailand, with a sharp increase in the first 4 years of life. In addition, this study provides insights into antibody titers in a large population of older children. The proportion with any detectable titer was virtually static after the age of 4 years. A significant proportion of children failed to develop an antibody response. Parental occupation and livings conditions were not recorded, but it is unlikely that any children living in northeast Thailand remain unexposed throughout childhood. We have observed previously that a proportion of patients with culture-proven melioidosis failed to develop an antibody response that is detectable by IHA. We suggest, therefore, that a proportion of people may either fail to mount an antibody response or respond to bacterial antigens that are not present in the IHA test. The significance of this observation for the risk of disease is unclear and warrants further study.

The increase in the proportion of children who had a titer of ≥ 1:160 may relate to repeated exposure to B. pseudomallei in the environment and boosting of the immune response. An alternative possibility is that this is caused by the presence of a bacterial focus that is not associated with clinical features of infection. The majority of the study population with a detectable immune response is unlikely to develop melioidosis during their lifetime, but the relative risk for future disease in those with a low versus high IHA titer is not known. This requires long-term, prospective longitudinal follow-up of a healthy population with known antibody titers. These data clearly show the futility of using an IHA titer of ≥ 1:160 as a diagnostic test for melioidosis in endemic regions.