Mean cases per week of patient visits and selected enteric pathogens at the Dhaka Hospital of the ICDDR, B during 1988, 1998, and 2004. All values are estimated cases per week based on surveillance data representing 4% (1987–1989) and 2% (1997–2004) of total cases. River level data was only available from May 1 (week 18) through October 15 (week 42) for each year studied. These periods correspond to highest river stages. Horizontal dashed line represents 90th percentile of mean number cases/week for non-flood years for each flood year. Vertical dashed lines represent epidemic periods. 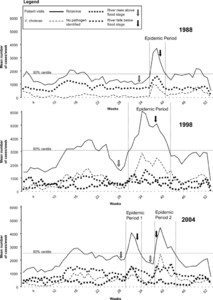 We examined demographic, microbiologic, and clinical data from patients presenting during 1988, 1998, and 2004 flood-associated diarrheal epidemics at a diarrhea treatment hospital in Dhaka, Bangladesh. Compared with non-flood periods, individuals presenting during flood-associated epidemics were older, more severely dehydrated, and of lower socioeconomic status. During flood-associated epidemics, Vibrio cholerae was the most commonly identified cause of diarrhea, and the only diarrheal pathogen whose incidence proportionally increased in each epidemic compared with seasonally matched periods. Rotavirus was the second most frequently identified flood-associated pathogen, although the proportion of cases caused by rotavirus infection decreased during floods compared with matched periods. Other causes of diarrhea did not proportionally change, although more patients per day presented with enterotoxigenic Escherichia coli, Shigella, and Salmonella species–associated diarrhea during floods compared with matched periods. Our findings suggest that cholera is the predominant cause of flood-associated diarrheal epidemics in Dhaka, but that other organisms spread by the fecal-oral route also contribute.