Analysis of resistant Salmonella strains by PFGE. DNA was digested with XbaI and separated by PFGE on a 1% agarose gel. The designation number of strains tested are reported above each lane. Lane 1320–2841: S. typhimurium DT104; 2033–2821: S. hadar. 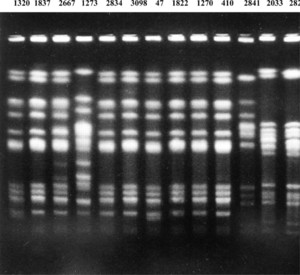 The molecular epidemiology, antimicrobial susceptibility, and mechanisms of resistance of 34 Salmonella spp. strains causing acute gastroenteritis, isolated from different provinces in Cuba, were determined. Sixty-four percent of the strains showed multiresistance. Salmonella typhimurium was the most frequent with 15 strains (44%), 13 of which belonged to phagotype 104 and presented similar genetic profiles of pulsed field gel electrophoresis. High levels of resistance to tetracycline (53%), spectinomycin (50%), ampicillin (44%), and chloramphenicol (41%) were found. Resistance to tetracycline was associated with the tet G and tet A genes. Resistance to ampicillin was caused by the presence of β-lactamases, mainly the CARB type. The floR gene was the main mechanism of resistance to chloramphenicol. Our results showed an antimicrobial susceptible clone of Salmonella enterica serotype Agona in two separate regions. This is the first report of the widespread dissemination of a multiresistant clone of S. enterica serotype Typhimurium definitive phage type 104 in Cuba.

In both developing and developed countries, acute gastroenteritis causes high levels of morbidity and mortality.1 One of the main etiological agents of this disease is Salmonella spp. The Salmonella genus is composed of approximately 2,400 serotypes with different phenotypic and genotypic characteristics.2 One of these characteristics is antimicrobial resistance. The Salmonella genus has been traditionally susceptible to antimicrobial agents, but an increase in the levels of resistance worldwide has been observed.3,4 Salmonella infections in Cuba is the third more frequent causes of acute gastroenteritis in adults and children after rotavirus and Entamoeba histolytica.5,6

In Cuba, several studies have reported a high percentage of Salmonella spp. strains resistant to several antimicrobial agents such as ampicillin, chloramphenicol, nalidixic acid, and trimethoprim/sulphamethoxazole.7

An efficient route of acquisition of resistance is through genetic elements including plasmids, transposons, and integrons. Currently, nine classes of integrons have been described, with the class 1 integron being the most frequently detected in clinical strains.8 Integrons have been described as an important cause of the spread of antimicrobial resistance in a variety of enteric bacteria including Salmonella.9,10 Two scenarios can be envisaged in antimicrobial resistance: 1) dissemination of an antimicrobial-resistant clone or 2) dissemination of a resistant gene carried in a genetic element. Integrons have also been considered as a tool for studying molecular epidemiology.11

The aim of this study was to determine the antimicrobial susceptibility and the molecular mechanisms of resistance of Salmonella spp. strains causing acute gastroenteritis in Cuba and to determine the potential dissemination of a resistant clone.

Serotyping and phage typing were performed in the Carlos III Institute (Madrid, Spain), taking into account the Manual of Kauffman and White and following the recommendations of Edward and Ewing.2,12

Detection of the mechanisms of resistance.

To determine the quinolone-resistance mechanisms, mutations in the quinolone-resistant determining region (QRDR) of the gyrA gene were detected by polymerase chain reaction (PCR) and DNA sequencing. A previously described colorimetric assay was performed to detect the presence of chloramphenicol acetyl transferase activity (CAT).14 The presence of the cmlA and floR genes associated with chloramphenicol resistance, the genes encoding β-lactamases (tem-like, carb-like, shv-like, and oxa 1-like), and the tet A, tet B, and tet G genes related to tetracycline resistance acquisition were detected by PCR. To determine the mechanism of trimethoprim resistance, the presence of dihydrofolate reductases was detected by PCR with generic primers and posterior restriction fragment length polymorphism (RFLP) with the appropriate restriction enzyme according to previously described methodology.15 The PCR products were detected by electrophoresis in 2% agarose gels. All the primers and PCR conditions used in this study have been previously described.3

In all the resistant Salmonella strains, the presence of Class 1 integrons was detected by PCR with specific primers described previously.14

DNA sequencing of the PCR products.

The analysis of chromosomal DNA by digestion with low frequency of cleavage restriction enzymes and separation of the fragments by pulsed field gel electrophoresis (PFGE) was performed as follows. Salmonella strains were cultivated in brain-heart infusion (BHI) and incubated overnight. They were resuspended in buffer TE-1. The plugs containing the DNA were elaborated with agarose insert 1.8%.16 Chromosomal DNA contained in the agarose plugs was digested with XbaI (Roche Diagnostic, Mannheim, Germany), and PFGE was performed with the CHEF DR II system (Biorad Laboratories, Hercules, CA) in 0.5× Tris-Borate-EDTA buffer (Severn Biotech, Kidderminster, UK). DNA restriction fragments were resolved in agarose (Bio-Rad) 1% wt/vol gels, and a low-range PFGE marker (New England Biolabs, Beverly, MA) was used as a size standard. Electrophoresis conditions were of 2.0–64 seconds for 20 hours.17

Of the 34 Salmonella strains studied from different regions around the country, Salmonella typhimurium was the most frequent, with 15 strains (44%), 13 of which belonged to phagotype 104, with 2 strains showing a non-recognized phagotype pattern. Salmonella agona was the second most frequently isolated serotype with eight strains (23%), followed by Salmonella hadar with two strains. Only one strain was found in other serotypes, such as Salmonella senftenberg, Salmonella infantis, Salmonella branderburg, Salmonella orion, Salmonella saintpaul, and one monophasic. Three strains were non-typable.

Molecular epidemiologic analysis was performed in S. typhimurium and S. hadar because of their multiresistance and in S. agona because of the fact that it was the second most prevalent serotype isolated. S. typhimurium showed five patterns of PFGE, being the pattern number 1 the most frequent with 11 isolates of 15 (Table 2; Figure 1). Although showing a different phagotype, the two strains corresponding to serotype Hadar presented an identical pattern of PFGE (Table 2). Among the eight Salmonella strains belonging to serotype Agona, six of the seven susceptible isolates belonged to the same PFGE pattern, whereas the remaining susceptible isolate and the resistant isolate each showed a different pattern. The geographical distribution of the resistant clones is shown in Table 2, which shows that the main S. typhimurium clone (clone 1) was detected in eight different provinces, distributed throughout the island, and the S. agona clone was disseminated in two provinces: Cienfuegos and Holguín.

Analysis of the molecular mechanisms of resistance showed that resistance to tetracycline was caused by the presence of the tet G gene (13 of 18 tetracycline-resistant strains) and the tet A gene (6 of 18 tetracycline-resistant strains). One strain presented both resistant determinants. The main mechanism of ampicillin resistance was the presence of CARB type β-lactamases, observed in 13 of 15 ampicillin-resistant strains, with only one strain of S. hadar showing a TEM type β-lactamases. No strain presented OXA type and SHV type β-lactamases. All chloramphenicol-resistant isolates presented the floR gene, and only the S. senftenberg strain showed CAT activity. None of the isolates presented the cmlA gene. One strain presented resistance to trimethoprim/sulphamethoxazole because of the presence of the dfrA1 gene (Table 3). The strain with intermediate susceptibility to nalidixic acid did not show any mutation in the gyr A or par C genes.

All the strains analyzed belonging to S. typhimurium DT 104 presented the floR and tet G genes, being responsible for resistance to chloramphenicol and tetracycline, respectively. These genes have been previously described to be located in the Salmonella genomic island 1 (SGI1).26,28 In this island, resistance genes are clustered and are bracketed by two integron structures,18 identical to those found in our study. The first integron carried the aadA2 gene, which confers resistance to spectinomycin and streptomycin, and the second integron contained the carb2 gene, conferring resistance to ampicillin.28 All the S. typhimurium DT 104 strains but two analyzed in our study presented these two integrons. The two strains presenting only the integron carrying the aadA2 gene may have a truncated resistance island. Therefore, S. typhimurium strains with the same pattern by PFGE can present different integrons, suggesting that this is not a discriminate tool to be used in epidemiologic analysis, as has been suggested.11

Three strains were not typable using the traditional serotyping techniques. Two of these three strains presented a similar mechanism of resistance profile as S. typhimurium DT 104. Other serotypes that showing a multiresistant phenotype were S. hadar and S. senftenberg, the latter of which is not frequently found. However, in some countries such as Brazil, it is a frequent serotype, occupying the third place of Salmonella isolates (10.3%) behind S. typhimurium and S. enteritidis.29 According to the network of human Salmonella surveillance in Europe, S. hadar is widely distributed across the European continent.24 Cruchaga et al.30 reported high levels of resistance, mainly to spectinomycin, ampicillin, tetracycline, and nalidixic acid, in strains of S. hadar isolates from humans and food, respectively. Analysis of PFGE profiles of the two resistant S. hadar was similar, but the PFGE in this serotype is of limited value, and the combination of different epidemiologic methods is recommended depending of the phage type studied.23 In our study, these two strains belonged to two different phage types and also showed different resistance phenotypes. Therefore, they may be considered two different clones, although those differences in the resistant phenotypes and phagotypes might reflect the geographical distribution of a single clonal type.

Epidemiologic analysis by PFGE of the S. agona strains showed a predominant clone disseminated mainly in two separate provinces: Cienfuegos and Holguín. In fact, although no molecular epidemiologic analysis have been performed, previous reports described this serotype among one of the main Salmonella serotypes isolated throughout the country and in several countries of American continent.4,31–33 In 1998 in the United States, a total of 11 states reported an increase in cases of S. agona.31 In Argentina and Mexico, several authors reported this serotype among the most frequent Salmonella isolated.32,33 The presence of antimicrobial-resistant strains of this serotype has previously been reported.34 However, the prevalence of antimicrobial-resistant strains is lower than the antimicrobial resistance observed in S. typhimurium. In some S. agona–resistant strains, the same resistant island, SGI1, has been shown.34 However, in our study, the multiresistant S. agona strain did not show the resistant determinants located in this island, although the integron, carrying the aadA2 gene, was found.

Mechanisms of resistance of the resistant Salmonella spp.