Effect of repeated Mectizan treatments on the seasonal transmission potential in two communities in Southern Chiapas. The year that each entomological evaluation was undertaken and the number of rounds of Mectizan treatment that occurred before the evaluation are shown on the abcissa. A, Morelos community. B, Las Golondrinas community. 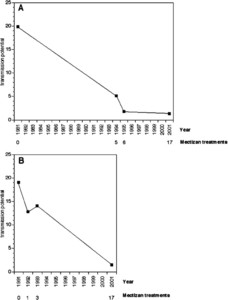 To study the impact of mass Mectizan treatment on Onchocerca volvulus transmission in Mexico, entomological surveys were carried out in the endemic foci of Oaxaca, Southern Chiapas, and Northern Chiapas. Collected flies were screened by polymerase chain reaction (PCR) for O. volvulus parasites. The prevalence of infected and infective flies was estimated using the PoolScreen algorithm and with a novel probability-based method. O. volvulus infective larvae were not detected in flies from 6/13 communities. In 7/13 communities, infective flies were detected, with prevalences ranging from 1.6/10,000 to 29.0/10,000 and seasonal transmission potentials ranging from 0.4 to 3.3. Infected and infective flies were found in a community in Northern Chiapas, suggesting that, according to World Health Organization criteria, autochthonous transmission exists in this focus. These data suggest that O. volvulus transmission in Mexico has been suppressed or brought to a level that may be insufficient to sustain the parasite population.