Prevalence of schistosomiasis among residences of positive and negative school children. *P < 0.01, by chi-square test. 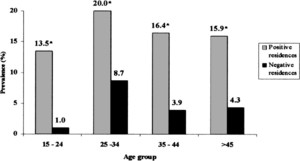 There is evidence that prevalence and worm burden have decreased significantly since the introduction of the Special Program for Schistosomiasis Control in Brazil during the 1970s.1–3 Given this fact, new objectives need to be defined transferring from control programs designed for morbidity reduction to strategies for transmission control. Moreover, in areas of low endemicity, the exact definition of the prevalence of a population, as well as the identification of asymptomatic carriers, becomes unviable because a large amount of unnecessary stool examinations has to be carried out to find a relatively small number of infected individuals. In this special epidemiologic setting, screening of the whole population turns out to be very costly, time-consuming, and not sustainable on a large scale. Therefore, the identification of defined groups at risk in areas with prevalence rates less than 20% is essential to maintain the viability of control strategies. As described by the World Health Organization,4 school children represent one of the most important risk groups. The advantages of screening school children are the low costs, good acceptance and compliance, and easy identification and localization of the individual.5 Nevertheless, the fraction of adult asymptomatic carriers will be missed by this approach. In areas of low prevalence, this fraction of the population plays an important role in maintaining the transmission of the disease.

Since schistosomiasis-positive school children are living in an environment where infection with Schistosoma mansoni is more likely, one can assume that members of their families are at a similar risk, which justifies the inclusion of these family members into the screening process. An important characteristic for schistosomiasis transmission is a set of household and leisure activities related to water use. Such activities may be related with the infection foci, leading to the spread of risk factors for the family members.6,7 The purpose of this study was to improve current schistosomiasis control programs by using this strategy to identify schistosomiasis-positive individuals in a more efficient way.

Jaboticatubas (19°31′S, 43°44′W) is a county in the outer metropolitan region of Belo Horizonte, Minas Gerais, Brazil. The town is well known as the capital of schistosomiasis because it attracted huge media attention in the 1960s. The area is characterized by rich water sources such as waterfalls, brooks, and rivers, which enhance the natural beauty of the region. The national park Parque Nacional da Serra do Cipó, half of which is situated in this area, is visited by tourists mainly during holidays and weekends. Jaboticatubas has an area of 1,113 km2, is 64 km from Belo Horizonte, and has a population of 13,530 inhabitants (Brazilian Institute for Geography and Statistics, 2000), of which 7,116 (52.6%) are in the urban area and 6,414 (47.4%) are in the rural areas. The local economy is based on agriculture and cattle breeding.

Based on reports of the National Health Foundation in the 1990s, the district of São José de Almeida and the localities of São José da Serra and Cipó Velho, which are situated north of Jaboticatubas, were chosen for the study. These areas have schistosomiasis prevalences greater than 15% in the most recent reports. All four schools in these areas were included in the study, which was conducted between 2001 and 2003.

A cross-sectional study was carried out to identify the prevalence of S. mansoni among the school children in four schools. Two were located in the district of São José de Almeida, one in the locality of São José da Serra, and one in Cipó Velho. Nearly all of the school age children (99%) living in the study area participate regularly in classes. A total of 1,533 students were enrolled in the four schools in 2001. After explaining the purpose of the project, each student received a stool collection container labeled with the following information: student name, registration number, school year, and teacher’s name. After distribution, the containers were given to the teachers up to three days later. The stool samples were then sent to the laboratory to be processed and examined using two slides for each sample according to the Kato Katz quantitative method.8

A questionnaire, which included information on monthly income and type of sanitary installations in the household, was provided to each residence. The purpose of this questionnaire was to determine if a relationship existed between specific parameters and schistosomiasis-positive individuals. The complete methodology and results of this survey are described elsewhere.10

Stool examinations of 1,533 school children, of whom 1,186 (77.0%) participated in the parasitologic survey, showed that 101 (8.6%) were positive for schistosomiasis. Of the 101 children, 3 moved out of the area and 1 dropped out of the study. The remaining 97 positive school children were included in this investigation. Among the helminthic diseases investigated, schistosomiasis had the highest prevalence (8.6%) with a geometric mean egg count of 50.67 per gram of feces. For other parasites, low prevalences were found: 4.2% for Ascaris lumbricoides, 1.8% for Trichuris trichiura, 2.1% for hookworm, 2.6% for Enterobius vermicularis, and 0.1% for Hymenolepis nana.

The estimates for sensitivity (50.0%), specificity (82.0%), positive predictive value (PPV) (39.1%), and the negative predictive value (87.7%) are shown in Table 3. No differences were found in these values relative to family income. The lack of sanitary installations resulted in an increase in these values compared with those that had internal or external sanitary installations.

The identification of individuals infected with S. mansoni living in areas of low prevalence is difficult because the number of egg-positive persons is relatively small in relation to the total population and low morbidity is shown by carriers of this disease. To overcome these difficulties, new strategies for detecting this infected and often asymptomatic group of the population must be developed. The importance of peridomi-ciliary schistosomiasis transmission relative to leisure and household activities, together with water use, is well known.6,7 Such activities may be related to infection foci, leading to a higher risk of the transmission of the disease within the family members.

Based on these findings and the recommendation of Montresor and others4 to use school children between 7 and 14 years of age as indicators of control strategies in helminth-endemic areas, we attempted to combine both approaches to identify positive individuals within a community in a low transmission area. In this study, the results of the stool examinations of schoolchildren are typical for an area with a low prevalence of schistosomiasis, showing a prevalence of 8.6%. However, the prevalence in residences of infected schoolchildren was 41.3%, which was 15.89 times higher than the prevalence of 2.6% in residences of uninfected school children. When school children in both groups were excluded, the prevalence in family members was only four times higher, with values of 15.5% in those related to schistosomiais-positive school children and 3.8% in those related to schistosomiasis-negative school children. Our data show that treatment of school children may miss a significant number of infected asymptomatic adults living in the same residence, who are easily accessible and probably responsible for the maintenance of the parasitic cycle in the area.

Since our objective was identification of positive individuals in a community using school children as indicators, it may be expected that the parasitologic survey would show an increased sensitivity and positive predictive value. The sensitivity of identifying a positive schoolchild in a residence in which another positive person was found was 50.0%. The positive predictive value of identifying at least one positive family member in a residence in which a positive school child lived was 39.1%. Higher values in this context have been observed,11 which showed that the prevalence observed in schools could predict the prevalence in the community and therefore indicate target areas for control programs. In contrast to the study of Rodrigues and others,11 the current study focused on the identification of residences with a higher frequency of individuals positive for schistosomiasis, and not only on identification of areas of increased prevalence. We observed a lower sensitivity and positive predictive value in our study. Nevertheless, in only 12.3% (negative predictive value = 100%) of residences of negative schoolchildren was a positive family member found, which indicates that application of our methodology results in only a small loss of positive individuals within the community. This low proportion of missing positive individuals is associated with an increased prevalence observed in positive schoolchildren (15.9 times higher), as well as an increased association between stool samples of school children and their family members (OR = 4.6), which indicates the potential of using school children as indicators for infection with S. mansoni among their family members.

Our methodology was limited because we excluded residences with no children between 7 and 14 years of age. In addition, elderly, single people, couples without children, and couples with small children were not included. The effect of these groups on disease prevalence will depend on their demographic distribution in the community. In rural areas with a more traditional life style, where elderly live with their families, young couples live with their parents, and there are few single people and couples with no children, the impact will be smaller than in a modern metropolitan community, with a high percentage of single people, couples without children, and elderly living in a different residence from their children and grandchildren. Another limitation of this approach was the low sensitivity. However, it is not clear whether these results will be observed in other areas. Therefore further applications of this methodology in different sociocultural settings are necessary to verify the consistency of these results.

If the data from this study is confirmed by other investigations, a considerable economic impact on schistosomiasis control programs in areas of low prevalence may be expected. The definition of specific targeted groups for stool examination, which in this case is school children and the residences of positive school children, will decrease the number of unnecessary negative diagnostic examinations. Economically, this decrease in the number of stool examinations means a significant reduction in personnel and material costs in detecting the same proportion of schistosomiasis-positive individuals.

The data of this study also suggests that family members of infected school children play an important role in maintaining the transmission of the disease in the peridomiciliar environment. If one considers that among family members habits of water contact are similar, a higher risk of infection and reinfection exists. Under these circumstances, it is necessary to re-define current criteria to detect these adult family members and provide adequate treatment. The active search for these positive family members is often hampered by lack of resources, i.e., time and personnel. In this case, health education in the school proved to be a valid alternative to reach family members. After a comprehensive education campaign, these school children will have a conscious knowledge about prevention, transmission, and general health risks of the disease. Mobilized in this way, school children have proven to be multipliers in transmitting this awareness to other family members, especially adults, and therefore facilitating diagnosis and treatment among their family members.12

Association between the infections among school children and their family members in Jaboticatubas, Minas Gerais, Brazil, 2001*

Sensitivity, specificity, and predictive values of the parasitologic survey among school children in relation to the results of stool examinations of their family members in Jaboticatubas, Minas Gerais, Brazil, 2001*