Different dominant serotypes in Nicaragua in 1999–2001 versus 2003. Serotype identification was performed by virus isolation and/or RT-PCR on samples from patients suspected of dengue who presented to the HIMJR and HEODRA. The percentage of each serotype was determined in relation to the total number of identified serotypes in each time period (N = 96 for 1999–2001; N = 54 for 2003).

Burden of disease and disease severity according to age group. A, Age-stratified distribution of dengue disease in 1999–2001 and 2003. The percentage of laboratory-confirmed dengue cases contributed by each age group out of the total number of confirmed dengue cases in hospitalized patients 0–14 years old is indicated. B, Frequency of severe manifestations of DHF/DSS according to age group. The percentage of laboratory-confirmed dengue cases in each age group presenting with one or more severe clinical signs associated with DHF/DSS is shown. 1999–2001 is referred to as DENV-2 (dark gray bars), while 2003 is referred to as DENV-1 (light gray bars). Significant differences between the two time periods are designated by asterisks: **P < 0.01. Controlling for age, DENV infection in the DENV-1 period is associated with more severe illness (P < 0.01, MH χ2). However, most of the difference is due to the 10–14 year age group.

Differential association of severe clinical manifestations of dengue with distinct DENV serotypes. A, Comparison of severe clinical signs of dengue associated with periods when DENV-1 versus DENV-2 predominated. The percentage of cases presenting with one or more of the four clinical manifestations characteristic of DHF/DSS is shown, comparing 1999–2001 to 2003. Significant differences between the clinical signs associated with predominance of DENV-1 versus DENV-2 are designated by asterisks: **P < 0.01. Plasma leak, signs of plasma leakage; Internal hem, internal hemorrhage. B, Age-stratified association of severe manifestations of dengue with different serotypes. The percentage of patients in each age group presenting with shock, signs of increased vascular permeability, internal hemorrhage, or platelet count ≤ 50,000/mm3 (see abbreviations above) was plotted. The upper panel refers to the period when DENV-2 dominated, and the lower panel shows the period when DENV-1 was predominant. As above, *P < 0.05; **P < 0.01. Controlling for age, dengue in the DENV-2 period is associated with more internal hemorrhage (P < 0.05, MH χ2) and shock (P < 0.01, MH χ2), whereas dengue in the DENV-1 period is associated with more plasma leakage (P < 0.01, MH χ2). 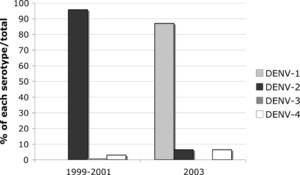 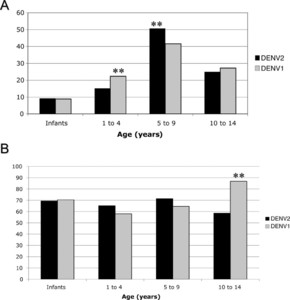 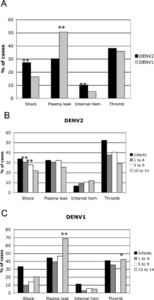 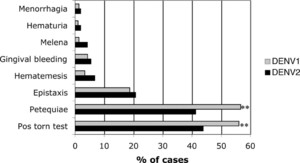 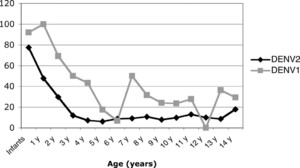 Dengue, the most prevalent arthropod-borne viral disease of humans, is caused by four serotypes of dengue virus (DENV 1–4). Although all four DENV serotypes cause a range of illness, defining precisely which clinical characteristics are associated with the distinct serotypes has been elusive. A cross-sectional study was conducted on 984 and 313 hospitalized children with confirmed DENV infections during two time periods, respectively, in the same hospitals in Nicaragua: a 3-year period (1999–2001) when DENV-2 accounted for 96% of the viruses identified, and the 2003 dengue season when DENV-1 predominated (87% of identified serotypes). When the two periods were compared, more shock (OR 1.91, 95% CI 1.35–2.71) and internal hemorrhage (OR 2.05, CI 1.16–3.78) were observed in the period when DENV-2 predominated, whereas increased vascular permeability was associated to a greater degree with the DENV-1 period (OR 2.36, CI 1.80–3.09). Compared with the DENV-2 period, the DENV-1 season was associated with more hospitalized primary dengue cases (OR 3.86, CI 2.72–5.48) and more primary DENV infections with severe manifestations (OR 2.93, CI 2.00–4.28). These findings provide new data to characterize the pathogenic potential of distinct DENV serotypes in human populations.