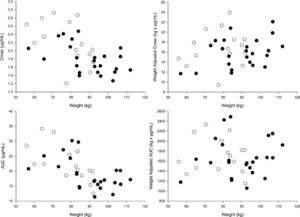 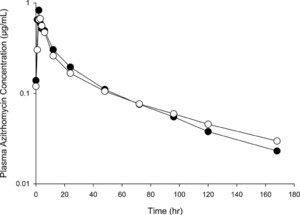 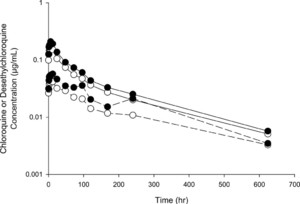 LACK OF A PHARMACOKINETIC INTERACTION BETWEEN AZITHROMYCIN AND CHLOROQUINE

A combination azithromycin/chloroquine regimen is currently being developed for the treatment of chloroquine-resistant malaria. Synergy of antimalarial effect has been reported with chloroquine in combination with azithromycin in vitro.1 A pilot clinical trial showed promising results in the treatment of Plasmodium falciparum malaria in India: 28 days after taking chloroquine or azithromycin, clinical success was observed in only 27% and 33% of patients, respectively, but when the two drugs were taken in combination, clinical success was achieved in 97% of patients.2 The mechanism of synergy between these two agents is not understood. Chloroquine resistance has been reversed by co-administration of agents, such as verapamil, with the ability to inhibit p-glycoprotein-mediated efflux.3 It is not known whether azithromycin is such an inhibitor; however, azithromycin has been shown to be a p-glycoprotein substrate.4 Thus, we investigated whether alterations in human pharmacokinetics of either compound could be responsible for at least part of the increased effectiveness of these compounds when given together.

Subjects of any race that met the following criteria were eligible to participate in the study: good health as determined by medical history, physical examination, clinical laboratory measurements, and electrocardiogram (ECG); age 18–60 years inclusive; either male or female of non–child-bearing potential; and with a body weight ≥ 50 kg. Subjects could not participate in the study if any of the following conditions existed: history of retinopathy, liver disease, or alcoholism; retinal or visual changes attributable to either 4-aminoquinoline compounds or any other etiology; psoriasis or porphyria; hypersensitivity to azithromycin, any other macrolide antibiotics, or 4-aminoquinoline compounds; use of any medication not considered acceptable by the clinical investigators during the 14-day period before the start of the study; donation of a unit of blood or participation in a study of investigational or marketed drugs during the 30-day period before initiation of treatment with study drug; or significant urine concentration of any drug that could interfere with the study. All doses were taken between 7:00 am and 11:00 am, after an overnight fast, with 240 mL of tap water. Food was restricted for at least one hour after each dose on days 1 and 2, and for at least four hours after dosing on day 3. Safety assessments consisted of clinical observation, physical examination, vital signs measurement, clinical laboratory measurements, and adverse events. Twelve-lead ECGs were recorded at screening and closeout for all subjects. In addition, for subjects in the chloroquine alone and chloroquine plus azithromycin treatment groups, ECGs were recorded predose on day 1 and 3–5 hours postdose on days 1 and 3.

The protocol and consent documents were reviewed and approved by the Institutional Review Board of the Pfizer Research Clinic. The study was conducted in accordance with the International Conference on Harmonization Guidelines for Good Clinical Practice, the Declaration of Helsinki, and in compliance with United States Food and Drug Administration regulations for informed consent and protection of subject rights as described in 21 Code of Federal Regulations 50, 56, and 312. Written informed consent was obtained from all participants. Subjects were told that they were free to withdraw from the study at any time.

Serum concentrations for azithromycin were measured by a validated liquid chromatography/electron capture method at BAS Analytics (West Lafayette, IN). The lower limit of quantitation was 10.4 ng/mL. The precision of the assay was within 5.9% and the accuracy ranged from −1.7% to 4.3%.

Pharmacokinetic azithromycin, chloroquine, and desethylchloroquine parameters were calculated from individual subject’s concentration-time profiles by non-compartmental methods using WinNonlin Pro version 2.1 (Pharsight Corp., Mountain View, CA). Maximum observed concentration (Cmax) and time of occurrence (tmax) were determined by inspection. The terminal phase rate (k) constant was estimated as the absolute value of the slope of a linear regression during the apparent terminal phase of the natural-logarithm (ln) transformed concentration-time profile. The terminal half-life (t½) was calculated as t½ = ln(2)/k. The area under the concentration time curve (AUC) to the last quantifiable concentration (AUC0–tlqc) was calculated using the linear trapezoidal method and extrapolated to infinite time (AUC0–∞) by the equation AUC0–∞ = AUC0–tlqc + (last quantifiable concentration)/k.

Log-transformed Cmax and AUC values for azithromycin and chloroquine were the primary parameters used in the assessment of interaction. The effect of chloroquine on azithromycin pharmacokinetics was evaluated within group 1. Parameter values were evaluated by an analysis of variance (ANOVA) model containing a fixed treatment and a random subject effect. The estimated treatment differences and the 90% confidence intervals for the differences were anti-log transformed back to the ratio of original scale. Absence of an interaction would be concluded if the anti-log-transformed confidence intervals for the true ratios of the test (azithromycin given together with chloroquine) to reference (azithromycin given alone) were to lie within the 80–125% range for both Cmax and AUC.

The effect of azithromycin on chloroquine pharmacokinetics was evaluated by comparison of groups 1 and 2. Examination of subject demographics showed that the mean weight of the chloroquine alone group was approximately 10 kg less than that of the azithromycin plus chloroquine group (Table 1). Since plots of weight versus chloroquine Cmax and AUC values (Figure 1) showed a correlation, Cmax and AUC values were corrected for subject weight (parameter value × subject weight) and weight-corrected parameter values were evaluated by an ANOVA model containing a fixed treatment effect. The estimated treatment differences and the 90% confidence intervals for the differences were anti-log transformed back to the ratio and confidence intervals of original scale. Absence of an interaction would be concluded if the anti-log-transformed confidence intervals for the true ratios of the test (azithromycin given in combination with chloroquine) to reference (chloroquine given alone) lie within the 80–125% range for both Cmax and AUC.

Forty subjects entered the study and 39 completed the study. One subject was discontinued on the third day of the chloroquine alone treatment because of an adverse event of abnormal vision (difficulty focusing); the abnormal vision resolved two days after discontinuation. A full concentration-time profile was not obtained for that subject; therefore; data from that subject were not used in pharmacokinetic evaluations.

Effect of chloroquine on azithromycin.

Effect of azithromycin on chloroquine.

Azithromycin is incompletely absorbed after oral administration with an absolute bioavailability of 38% after oral administration. It has an apparent-steady state volume of distribution of approximately 31 L/kg. The plasma protein binding of azithromycin is concentration dependent, ranging from 51% at 0.2 μg/mL to 7% at 2 μg/mL. Approximately 6% of the dose is eliminated unchanged in the urine. Biliary excretion, predominately as unchanged drug, is a primary route of elimination. The metabolism of azithromycin has not been fully elucidated. Azithromycin has a terminal elimination half-life of approximately 68 hours.6

Previous studies in healthy volunteers have demonstrated that chloroquine is almost completely absorbed after oral administration with an absolute bioavailability of 78–89%.7 It has a large volume of distribution with estimates ranging from 116 to 800 L/kg when estimated from plasma chloroquine concentrations.7,8 Chloroquine binding to plasma proteins is concentration independent; there is a modest steroselective difference because 66.6% of the (+)-chloroquine and 45.9% of (−)-chloroquine is bound to plasma proteins.9 Approximately 50% of a given dose is recovered unchanged in the urine. Chloroquine is metabolized predominately through dealklyation to desethylchloroquine, bis desethylchloroquine, and 7-chlor-4-aminoquinoline. Plasma desethylchoroquine concentrations reach 20–30% of parent concentrations after single doses and 36–48% of parent at steady state.7,10 Half-lives of chloroquine and deschloroquine are long, both ranging from 20 to 60 days. Results from the present study are consistent with previous observed chloroquine data with the exception of half-life. The sampling scheme used in the present study was insufficient to capture the true terminal phase.

Azithromycin demonstrates antimalarial activity in vitro against both chloroquine-sensitive and -resistant P. falciparum and has been successfully used as chemoprophylaxis.11,12 It has a proven safety record in children and lack of teratogenicity in nonclinical studies. In addition, early neonatal mortality rate and rate of low birth weight were reduced compared with no intervention in a large study of women treated with azithromycin during pregnancy as part of a preventive therapy regimen for sexually transmitted diseases.13 Furthermore, azithromycin has shown synergy with chloroquine in vitro. The combination of azithromycin with chloroquine may provide important advantages over existing treatment options, not only with respect to the potential for use in children and pregnant women, but also with respect to factors such as safety, cost, and tolerability.

The present study was undertaken to rule out a systemic drug-drug interaction as the cause of the apparent synergy of azithromycin and chloroquine given in combination to treat chloroquine-resistant malaria. Since both drugs may be modulators of similar transporter systems, it was not inconceivable that the synergy was due to an increased exposure to one or both of the agents because of improved bioavailability or a decrease in clearance. The pharmacokinetic parameters observed in this study were consistent with those reported previously for azithromycin and chloroquine when administered to healthy subjects. Furthermore, the similarity of pharmacokinetic parameters between treatments in this study clearly demonstrate that the apparent synergy is not the result of a systemic drug-drug interaction.