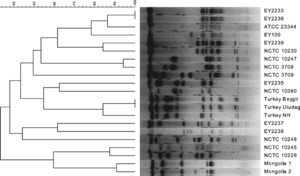 Pulsed-field gel electrophoresis (PFGE) and multilocus sequence typing (MLST) was used to type 21 laboratory strains of Burkholderia mallei. We demonstrated good resolution by PFGE together with clustering of some geographically related isolates, and confirmed previous observations that B. mallei is clonal as defined by MLST.

Burkholderia mallei is the causative agent of glanders.1 Historically, this pathogen was an important cause of morbidity and mortality in horses worldwide, but natural disease is now extremely rare in any host. The ecologic niche of this bacterium is thought to be the nasal passages of horses, and its demise is probably related to the decrease in equine numbers worldwide combined with an inability to survive in the environment. Established national strain collections maintain a limited number of isolates, most of which were originally isolated between 1930 and 1960. Burkholderia mallei is also a recognized biothreat agent, and is listed as a category B disease/agent by the U.S. Centers for Disease Control and Prevention. The organism could be spread by aerosol, has the potential to cause serious disease with a high mortality rate, and is intrinsically resistant to many antibiotics. In addition, no vaccine is available. Pre-emptive evaluation of readily available typing techniques would provide valuable information towards strategic planning of forensic investigation in the event of a deliberate release.

Typing of B. mallei has received little attention to date. Five B. mallei isolates were included in a description of the development of a mutlilocus sequence typing (MLST) scheme for B. pseudomallei, in which all five were reported to belong to a single clone (sequence type ST 40).2 A recent study reported that 17 distinct ribotypes were resolved for 25 isolates of B. mallei using two separate restriction enzymes.3 Bacterial typing using pulsed-field gel electrophoresis (PFGE) is readily and widely available, and is a straightforward technique that could be used at short notice. Typing by PFGE of the closely related B. pseudomallei is well described and has high resolution.2,4 The aim of this study was to examine 21 laboratory isolates of B mallei by PFGE and to define the utility of this technique for forensic investigation. In addition, these isolates were examined by MLST to extend the investigation of sequence types of this species.

The isolates examined are listed in Table 1. For PFGE, a single bacterial colony was streaked onto Columbia agar and incubated for 48 hour at 37°C in air. Colonies were harvested and suspended to an optical density at 600 nm of 1.2 in suspension buffer (75 mM sodium chloride, 25 mM EDTA, pH 7.5). This was mixed (1:1) with molten 2% low-melting point ultrapure agarose (Gibco-BRL, Gaithersburg, MD) and pi-petted into PFGE plug molds (Bio-Rad Laboratories, Hercules, CA). Plugs were lysed overnight at 56°C in lysis buffer (0.1% sodium dodecyl sulfate, 25 mM EDTA, pH 8.0) containing 500 μg/ml of proteinase K (Invitrogen, Carlsbad, CA) and rinsed three times with TE buffer (10 mM Tris, 10 mM EDTA). Prior to PFGE, plugs were digested overnight with 10 units of Spe I (New England Biolabs, Beverly, MA) at 37°C for 18 hours before being loaded onto a 1% agarose gel (Gibco-BRL) in 0.5× TBE buffer (45 mM Tris, 45 mM boric acid, 1 mM EDTA). Each well was overlaid with 0.8% low-melting agarose. The PFGE was conducted on a CHEF-DRIII system (Bio-Rad Laboratories) for 44 hours at 14°C and 6 V/cm using the following parameters: initial switch time, final switch time, and run time; block I: 10–60 V for 18 hours, block II: 30–40 V for 18 hours, and block III: 50–90 V for 8 hours. Lambda concatamers were run as the standard (Promega, Madison, WI). Gels were stained with ethidium bromide, destained in water, and photographed under ultraviolet light using the Gel Doc 1000 system (Bio-Rad Laboratories). Analysis of PFGE banding patterns was conducted using the BioNumerics version 2.5 software (Applied Maths, Kortrijik, Belgium). The PFGE types were defined on the basis of DNA banding pattern. Isolates were regarded as genotypically indistinguishable if they had identical patterns, related if they differed by one to three bands, and unrelated if they differed by four or more bands. A similarity matrix was produced using the Dice coefficient and a dendrogram was generated by clustering by the unweighted pair group method with arithmetic mean with 1% band and position tolerance. Isolates with > 80% similarity were considered related.

For MLST, bacterial isolates were streaked from the freezer vial onto Columbia agar. A single colony was inoculated into tryptic soy broth and incubated overnight in air at 37°C, after which genomic DNA was extracted using the Wizard Genomic DNA purification kit (Promega). Typing was performed using the primers and conditions previously described,1 with the exception that gmhD was amplified using a nested approach with the following primers: outer primer pair: gmdD-up (5′-TCGCGCAGGGCACGCAGTT-3′) and gmhD-dn (5′-GGCTGCCGACCGTGAGACC-3′); inner primer pair gmhD-up (5′-TCGCGCAGGGCACGCAGTT-3′) and gmhD-dn (5′-GTCAGGAACGGCGCGTCGTAGC-3′). Alleles at each of the seven loci were assigned and the allelic profile (string of seven integers) was used to define sequence type (ST) using the B. pseudomallei MLST website (http://bpseudomallei.mlst.net/).

All 21 isolates were a single clone (ST40) by MLST. Analysis by PFGE yielded 13 separate types based on comparison of banding patterns. Six PFGE types contained more than one isolate, but an identical banding pattern within a given type occurred on only two occasions (T2/T3 and EY2233/EY2236). Source of origin was associated with related banding pattern in some instances, such as M1 and M2 from Mongolia that differed by a single band, and T1, T2, and T3 from Turkey. Clustering according to country of origin was not seen for the NCTC isolates. For example, NCTC 10248, NCTC 10247, and NCTC 10260 were all from Turkey but were not related by PFGE. The dendrogram is shown in Figure 1.

Burkholderia mallei is believed to have originated from B. pseudomallei.2,5,6 The lack of diversity in B. mallei MLST housekeeping genes suggests that this evolutionary divergence occurred relatively recently. The diversity in PFGE patterns for B. mallei are in marked contrast with the MLST findings, and indicates a more rapid process of genomic change. This may be related to the finding that B. mallei contains numerous insertion sequence elements that have mediated extensive deletions and rearrangements of the genome relative to B. pseudomallei.6

Our findings indicate that PFGE is a highly discriminatory typing tool for B. mallei. An initiative to assemble all known B. mallei and develop a database of PFGE banding pattern types may be an invaluable forensic resource in the event of a future outbreak of animal or human disease.