Reduction in percentage infection in Anopheles freeborni mosquitoes fed on 90-, 180-, and 204-day sera from monkeys immunized with Pvs25 plus Montanide ISA720 and Pvs25 plus alum.

Reduction in oocysts per positive gut in Anopheles freeborni mosquitoes fed on 90-, 180-, and 204-day sera from monkeys immunized with Pvs25 plus Montanide ISA720 and Pvs25 plus alum. 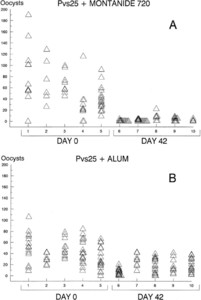 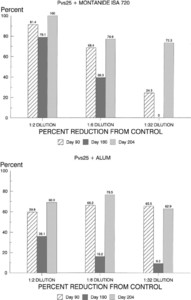 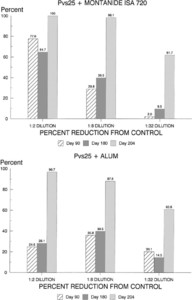 Search for other papers by CAROLE A. LONG in
Current site
Google Scholar
PubMedClose

Limiting or eradicating the establishment of new malaria infections through the use of transmission-blocking vaccines is one of the promising potential strategies for controlling this disease in endemic areas.1–4 These vaccines are based on the premise that gamete, zygote, or ookinete surface antigen-specific antibodies present in the blood meal ingested by the mosquito along with gametocytes will inhibit or prevent the development of the parasite within the vector and thus prevent transmission.5–8 Evaluation of the potential of the different vaccine constructs can be facilitated through the immunization of non-human primates and the indirect assessment of efficacy by using membrane feeding on either cultured gametocytes or gametocytes harvested from humans or experimentally infected animals.

A candidate transmission-blocking vaccine antigen of the P25 family of proteins9–12 present on the surface of zygotes and ookinetes of Plasmodium vivax, Pvs25, was recombinantly expressed, purified, formulated with two different adjuvants, and then used to immunize Macaca mulatta monkeys. Gametocytes from P. vivax-infected chimpanzees were used to assess the inhibition of mosquito infection and the reduction in number of oocysts produced in the mosquitoes by immunized monkey sera. The results of this study are reported here.

Clinical grade Pvs25 was prepared as previously described.13 Briefly, a parasite gene encoding Pvs25 was subcloned into the plasmid YepRPEU-3 and transformed into Saccharomyces cerevisiae VK1 cells. After fermentation, a series of chromatography steps was used for purification and buffer exchange with nickel nitrotriacetic acid Superflow Phenyl Sepharose hydrophobic interaction chromatography and a Superdex 75 size-exclusion column. Characterization of this product has been previously reported.13

The animal study was done in compliance with National Institutes of Health guidelines and under the auspices of an Animal Care and Use Committee-approved protocol. Ten M. mulatta monkeys, (5 males and 5 females) were randomly divided into two groups. The two groups of five animals each received by intramuscular injection 15 μg of Pvs25 adsorbed onto 600 μg of alum, or 15 μg of Pvs25 combined with Montanide ISA 720. The monkeys were immunized on days 0, 28, and 181, and bled on days 0 (before immunization), 42, 90, and 204 (14 and 62 days after the second immunization and 23 days after the third immunization).

Splenectomized adult Pan troglodytes were infected via intravenous inoculation with previously frozen (virus-free) samples of the Salvador I strain of P. vivax.14 All animals were held at the Yerkes Regional Primate Research Center and studies were conducted under the auspices of an Emory University Animal Care and Use Committee-approved protocol. When the asexual parasitemia was approximately 10,000/μL and gametocytes were present, blood was collected, and the blood transported within 30 minutes to the insectary facility for feedings.

Anopheles freeborni (originally from California) were maintained continuously in the Division of Parasitic Diseases laboratory at the Centers for Disease Control and Prevention. Once blood arrived at the insectary, it was centrifuged and the plasma was removed. Rhesus sera for assessment were diluted in heat-inactivated fetal-bovine serum before being combined 1:1 with packed erythrocytes from the infected chimpanzee. Feeders were arranged in series with one control (day 0 plasma) and three dilutions of test sera that were assessed during each 8–10-minute interval. Approximately 50 mosquitoes were placed in pint ice cream carton cages and allowed to feed to repletion. Mosquitoes were then held in incubators at 25°C until dissection. After 7–9 days of incubation, mosquitoes were dissected, the midguts were examined, and the number of oocysts on the midguts was counted; guts were suspended in a 2% aqueous solution of mercurochrome that allowed for a contrasting vital staining of the parasites.

Percent mosquitoes infected was compared using a general linear model (GLM) with a binomial response probability distribution. Geometric mean oocyst counts were compared using a GLM model with a normal response probability distribution. Geometric means were calculated by exponentiating the log mean of the oocyst counts. The SAS procedure Genmod (SAS Institute, Cary, NC), which implemented the generalized estimating equations procedures to adjust for the correlation that resulted from bleeding the same five monkeys on subsequent days after immunization, was used for the analysis. Statistical significance was set at alpha = 0.05.

The initial feeding of mosquitoes on gametocytemic blood from the chimpanzee compared the sera collected prior to immunization and that collected at day 42 (14 days after the second immunization) at a 1:2 dilution. The results were examined using two criteria, i.e., percentage mosquitoes infected and oocysts per gut. Only An. freeborni mosquitoes were fed and only those that retained their eggs were examined. For the five monkeys immunized with Pvs25 formulated in Montanide ISA 720, 50 (94.3%) of 53 mosquitoes were infected in the presence of sera collected before immunization compared with 31 (47.7%) of 65 mosquitoes infected at day 42 (P = 0.0012), a 49.4% reduction in mosquito infections. Geometric mean oocyst counts at day 0 were 48.7 per positive gut compared with 3.08 per positive gut at day 42 (P < 0.0001). This represents a 93.7% reduction in the number of oocysts per gut and a 98.6% reduction in overall oocyst burden. The distribution of oocyst numbers in An. freeborni compared with day 0 versus day 42 antisera from animals immunized with Montanide ISA 720 is shown in Figure 1A, in which the median oocyst count per gut was 45 for day 0 plasma and 0 for day 42 plasma.

One hundred forty-two days after second immunization (day 180), sera were again examined at three different dilutions: 1:2, 1:8, and 1:32. Again, each of the 30 serum samples used its own day 0 serum as the control. The results indicated that monkeys that had been immunized with Pvs25 and Montanide ISA 720 had significant transmission-blocking activity (TBA) as shown by a greater than 60% reduction in mosquito infection and an oocyst reduction of approximately 80% at the 1:2 serum dilution. However, it is evident by the titration of the sera for TBA that activity had decreased over time since the second immunization and this was most marked within the alum group, which decreased mosquito infection only 25% and oocyst density by 36% at day 180.

After a third immunization at day 180, sera were assessed at day 204. The reinforcement in TBA was strong and dramatic with both adjuvant groups. Sera were examined at three different dilutions: 1:2, 1:8, and 1:32. Again, each of the 30 serum samples used its own day 0 serum as the control. At a 1:2 dilution of sera from the Montanide ISA 720 immunized group, there were no infected mosquitoes of 120 examined and inhibition of infectivity was still significant at 98% and 62% at dilutions of 1:8 and 1:32, respectively (Tables 1 and 2 and Figures 2 and 3). The alum-immunized monkeys were almost equally as strong with only 2.9% of the mosquitoes infected; 97% reduction of infectivity at the 1:2 dilution. Significant TBA was also evident when sera were diluted further at 1:8 and 1:32; the sera continued to reduce mosquito infections by 88% and 61%, respectively (Tables 1 and 2 and Figures 2 and 3). Oocysts in the Montanide ISA 720 group of immunized primates, although not evident with sera tested at the 1:2 dilution, were also reduced by 76.9% with an eightfold dilution of the sera and 83% if diluted to 1:32. The sera from alum-immunized monkeys were not as efficient in reducing oocyst numbers, but sera were nevertheless effective in reducing the oocyst counts by 69% at a 1:2 dilution.

This particular study had a number of different aspects that pertain towards the development of transmission-blocking vaccines against P. vivax malaria. Plasmodium vivax infections in chimpanzees provide enough gametocyte infected blood to conduct multiple tests under laboratory conditions to establish proof of principle in the development of this particular transmission-blocking vaccine and others. Plasmodium vivax infections in chimpanzees also provide a reliable source of mosquito-infective blood that consistently give good oocyst levels in such diverse species of mosquitoes as An. freeborni, An. stephensi, and An. gambiae, each of which readily feed through artificial membranes.

The initial assessment for TBA for the Pvs25 vaccine occurred two weeks after the second immunization and indicated a strong reduction in oocyst numbers (94%) and a moderate reduction (49%) in the percentage mosquito infection, which was much more evident in monkeys immunized with Pvs25 combined with Montanide ISA 720 than in monkeys immunized with Pvs25 combined with alum. The latter group produced antibodies to Pvs25 that reduced oocyst numbers but not the percentage of infected mosquitoes.

Assessment of the possible long-term persistence (if any) of transmission-blocking immunity was done by assaying sera collected at day 90 and day 180 (62 and 152 days after the second immunization). At day 42, the results with Pvs25 and alum were such that only three of five rhesus monkeys had serum antibodies capable of reducing oocyst counts significantly below that of day 0 serum and this activity was lost by day 180. However, the sera from monkeys immunized with Pvs25 and Montanide ISA 720 at day 90 and day 180 retained the ability to reduce the number of infected mosquitoes and the reduction of oocysts by day 90 to 80%. Thus, these studies suggest that immunization of M. mulatta monkeys with Pvs25 and Montanide ISA 720 was more effective in the development of long-lasting transmission-blocking immunity to P. vivax than using alum as an adjuvant in the vaccine formulation. This was minimally evident two weeks after the second immunization, but strongly demonstrable 62 and 152 days after the second immunization.

At day 181, third immunizations were given. Three weeks later, an assessment of the inhibition of mosquito infection showed very high levels of activity with sera from both groups of animals such that sera from monkeys receiving Pvs25 formulated in Montanide ISA 720 exhibited complete TBA. Complete TBA has been reported previously, but this was achieved with sera from mice that were immunized with Pvs25 and, surprisingly, alum.8 However, those primates that received Pvs25 and alum appeared to have somewhat less inhibition than did those receiving Pvs25 and Montanide ISA 720, which was made most apparent by dilution of the sera 1:8 and 1:32 in addition to assessing 1:2 dilutions.

Although TBA as measured three weeks later by membrane feeding was strongly reinforced by a third immunization given 181 days after the primary immunization, this activity did not appear to be particularly correlative with Pvs25 antibody activity as measured by enzyme-linked immunosorbent assay (ELISA). Pvs25 antibody units in the sera of these rhesus monkeys as determined by ELISA increased to a peak by day 42 and then decreased 10-fold thereafter. However, the blocking activity remained and apparently increased by day 90 and remained positive at day 180. The levels of antibody as measured by ELISA were increased in both adjuvant groups by the third immunization at day 181 and measured three weeks later. However, these second peaks were not greater in magnitude but were equal to those obtained after the second immunization, which suggested the possibility of an antibody maturation effect for the enhanced TBA noted after the third immunization and for the persistence of significant functional activity in the Montanide ISA 720 group in the face of decreasing antibody levels. Pvs25 has recently been tested in a phase I clinical trial using alum as adjuvant, although here Montanide ISA 720 appeared to give more robust antibody responses in rhesus monkeys.15

Percent infection in Anopheles freeborni mosquitoes fed through membranes on gametocytes of Plasmodium vivax combined with 1:2, 1:8, and 1:32 dilutions of sera from 10 Macaca mulatta monkeys immunized with Pvs25 plus Montanide ISA 720 or Pvs25 plus alum

Geometric mean oocysts per positive gut in Anopheles freeborni mosquitoes fed through membranes on gametocytes of Plasmodium vivax combined with 1:2, 1:8, and 1:32 dilutions of sera from 10 Macaca mulatta monkeys immunized with Pvs25 plus Montanide ISA 720 or Pvs25 plus alum*