Changes in observed male frequencies in each cage population. The mean sex ratios for three replications were calculated and plotted as percent males with standard deviations (error bars).

Changes in T37-specific allele frequencies for each chromosome at the whole population level. A, LF284; B, LF355; C, LF323. Error bars show the standard deviation. 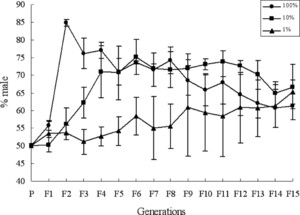 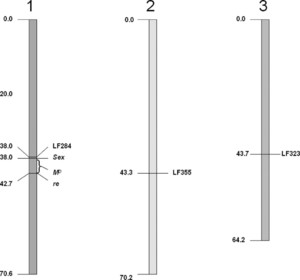 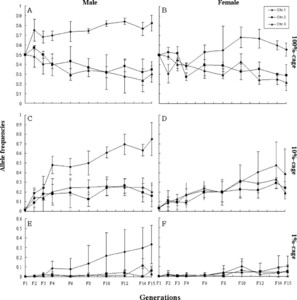 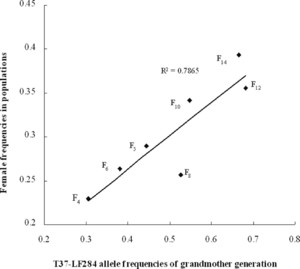 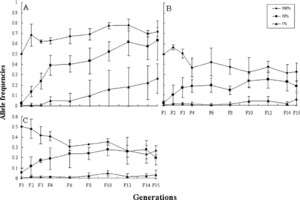 Control of arthropod-borne diseases based on population replacement with genetically modified non-competent vectors has been proposed as a promising alternative to conventional control strategies. Due to likely fitness costs associated with vectors manipulated to carry anti-pathogen effector genes, the effector genes will need to be coupled with a strong drive system to rapidly sweep them into natural populations. Endogenous meiotic drive systems have strong and stable population replacement potential, and have previously been reported in two mosquito species: Aedes aegypti and Culex pipiens. To investigate the influence of an endogenous meiotic drive gene on Ae. aegypti population dynamics, we established three experimental population types that were initiated with 100%, 10%, and 1% male mosquitoes carrying a strong meiotic driver (T37 strain) and 100% sensitive females (RED strain), respectively. Among the 100% and 10% populations, early generations were highly male biased, which reflected the effects of the meiotic driver, and remained more than 60% male by the F15. A genetic marker tightly linked with the meiotic driver on chromosome 1 showed strong selection for the T37 strain-specific allele. Similar but reduced effects of the meiotic driver were also observed in the 1% populations. These results suggest that release of Ae. aegypti males carrying a strong meiotic driver into drive sensitive populations can be an effective tool for population replacement, and provide a foundation for additional studies including both experimental populations and simulations by mathematical modeling.