Regression of number of An. gambiae s.l. pupae in habitat censuses on number of larvae in area samples from the same habitats. Data transformed by log10 (x+1).

Mean An. gambiae s.l. larvae per area sample per day and mean pupae per m2 per day in different larval habitat types in a western Kenya village.

Linear regression of number of An. gambiae s.l. larvae in area samples (A) or pupae in whole habitat census (B) on total number of days habitats held water (stability). Larval and pupal data were transformed with log10(x+1). 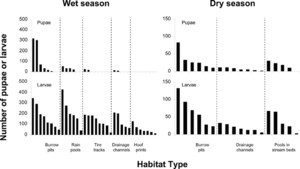 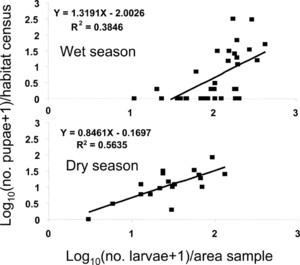 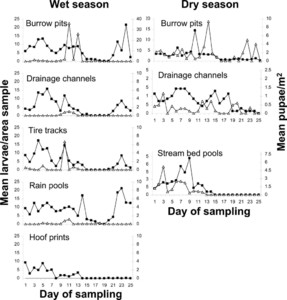 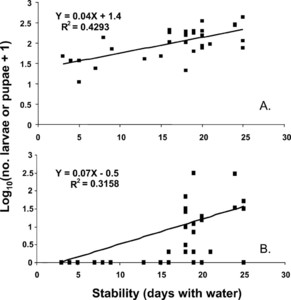 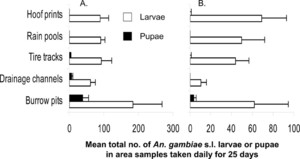 The productivity of larval habitats of the malaria vector Anopheles gambiae for pupae (the stage preceding adult metamorphosis) is poorly known, yet adult emergence from habitats is the primary determinant of vector density. To assess it, we used absolute sampling methods in four studies involving daily sampling for 25 days in 6 habitat types in a village in western Kenya. Anopheles gambiae s.s. comprised 82.5% of emergent adults and Anopheles arabiensis the remainder. Pupal production occurred from a subset of habitats, primarily soil burrow pits, and was discontinuous in time, even when larvae occupied all habitats continuously. Habitat stability was positively associated with pupal productivity. In a dry season, pupal productivity was distributed between burrow pits and pools in streambeds. Overall, these data support the notion that source reduction measures against recognizably productive habitats would be a useful component of an integrated management program for An. gambiae in villages.