Spot and feature GIS map of the village of Kisian in western Kenya, showing distribution and location of larval habitats relative to other landscape features. Grid shows 300 × 300 m (0.09 km2) cells for habitat distribution analysis. The two cells overlapping with the VBCRC were excluded from the analysis. VBCRC, Vector Biology and Control Research Center.

Frequency distribution of the number of potential An. gambiae larval habitats in 0.09 km2 cells of the landscape of Kisian, a village in rural western Kenya. 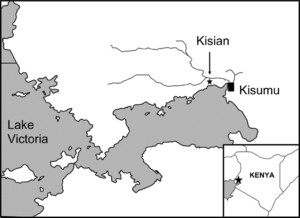 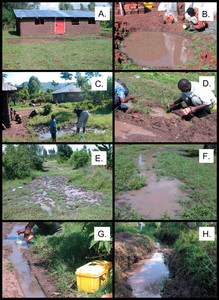 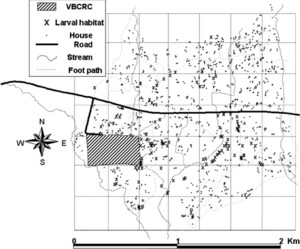 DISTRIBUTION, DESCRIPTION, AND LOCAL KNOWLEDGE OF LARVAL HABITATS OF ANOPHELES GAMBIAE S.L. IN A VILLAGE IN WESTERN KENYA

A sampling census revealed 104 aquatic habitats of 6 types for Anopheles gambiae s.l. larvae in a village in western Kenya, namely burrow pits, drainage channels, livestock hoof prints, rain pools, tire tracks, and pools in streambeds. Most habitats were created by human activity and were highly clustered in dispersion pattern within the village landscape. Landscape analysis revealed that six of forty-seven 0.09 km2 cells superimposed over the village harbored 65% of all habitats. Focus group discussions and in-depth interviews with villagers revealed the extent of knowledge of the village residents of larval habitats, mosquito sources in the local environment, and what might be done to prevent mosquito breeding. Participants did not associate specific habitats with anopheline larvae, expressed reluctance to eliminate habitats because they were sources of domestic water supply, but indicated willingness to participate in a source reduction program if support were available.