Structure of the Plasmodium falciparum merozoite surface protein 1 gene and the strategy for determination of 5′ recombinant type and 3′ sequence type. Inter-allele conserved, semi-conserved, and variable blocks are indicated by open, horizontally hatched, and vertically hatched columns, respectively. For variable blocks, MAD20-type, K1-type, and RO33-type sequences are represented by half-tone, checkerboard, and cross-striped bars, respectively. The 5′ recombinant type was determined by polymerase chain reaction (PCR) amplification of blocks 2–6 using allelic type-specific primers of blocks 2 and 6, followed by a nested PCR for blocks 4a and 4b using allelic specific primers of blocks 4a and 4b. The five amino acid substitutions in block 17, indicated by the one-letter codes, were determined by sequencing. The 3′ sequence type is the combination of those residues.

Frequency distribution of merozoite surface protein 1 (msp1) gene haplotypes in Plasmodium falciparum isolates from the Solomon Islands, Thailand, and Vanuatu. The msp1 haplotypes, which are unique associations of 5′ recombinant types and 3′ sequence types, are indicated along the x-axis.

Linkage disequilibrium in the Plasmodium falciparum merozoite surface protein 1 gene in populations from the Solomon Islands (area A = 1995–1996; area B = 1994) and Thailand. Pairs of polymorphic blocks 2, 4a, 4b, and 6, and three polymorphic residue sites (Q/E, TSR/KNG, and L/F) in block 17 were subjected to the R2 test. 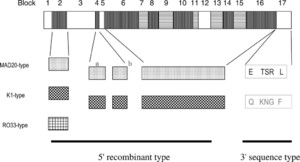 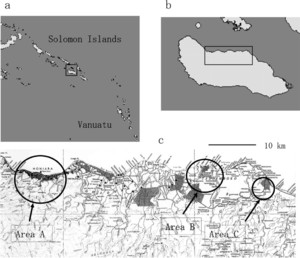 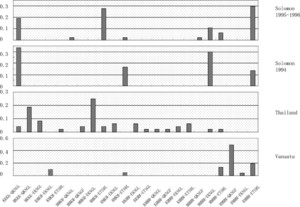 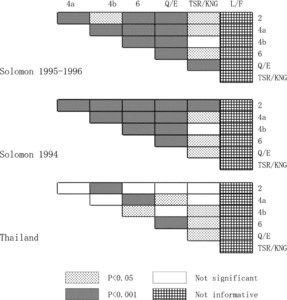 Meiotic recombination generates allelic diversity in the Plasmodium falciparum merozoite surface protein 1 (msp1) gene. In this study, we monitored recombination-based diversity of msp1 in Guadalcanal, the Solomon Islands, where malaria transmission is high. We identified 5′ recombinant types, 3′ sequence types, and msp1 haplotypes (unique associations of 5′ recombinant types and 3′ sequence types), and compared them with those from areas of low transmission in Thailand and Vanuatu. The mean number of 5′ recombinant types per person (multiplicity) was lower in Guadalcanal than in Thailand. Guadalcanal populations had 6–8 msp1 haplotypes; the numbers are comparable to Vanuatu but much lower than in Thailand. There were marked geographic differences in distribution of msp1 haplo-types. Linkage disequilibrium in msp1 was stronger in Guadalcanal than in Thailand, suggesting limited recombination events in the Solomon Islands. We suggest that the frequency of recombination events in msp1 is determined not only by transmission intensity but by the number of msp1 alleles prevalent and multiplicity of infections.