Average number of A. darlingi collected per person between 6 pm and midnight (all sites combined) by collection period. Collections took place once every 3 weeks (16 collections total). 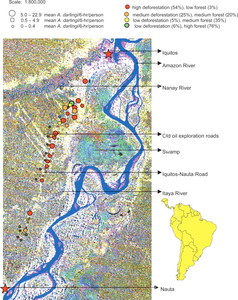 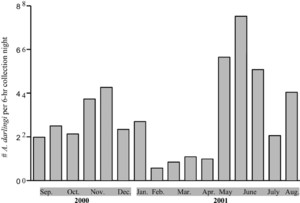 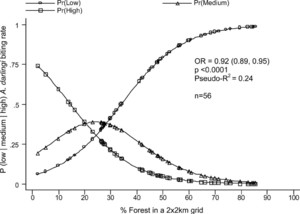 THE EFFECT OF DEFORESTATION ON THE HUMAN-BITING RATE OF ANOPHELES DARLINGI, THE PRIMARY VECTOR OF FALCIPARUM MALARIA IN THE PERUVIAN AMAZON

To examine the impact of tropical rain-forest destruction on malaria, we conducted a year-long study of the rates at which the primary malaria vector in the Amazon, Anopheles darlingi, fed on humans in areas with varying degrees of ecological alteration in the Peruvian Amazon. Mosquitoes were collected by human biting catches along the Iquitos-Nauta road at sites selected for type of vegetation and controlled for human presence. Deforested sites had an A. darlingi biting rate that was more than 278 times higher than the rate determined for areas that were predominantly forested. Our results indicate that A. darlingi displays significantly increased human-biting activity in areas that have undergone deforestation and development associated with road development.