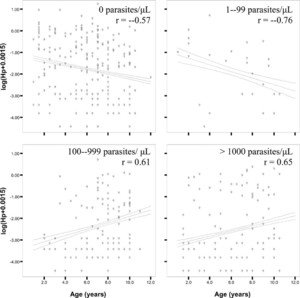 ASSOCIATION OF HAPTOGLOBIN LEVELS WITH AGE, PARASITE DENSITY, AND HAPTOGLOBIN GENOTYPE IN A MALARIA-ENDEMIC AREA OF GABON

Haptoglobin (Hp) levels were investigated in relation to host genotype in a malaria-endemic area in Gabon. A cross-sectional study of 1–12-year-old children was conducted in the rainy season, a period of high malaria transmission, to examine this relationship. Variables that influenced Hp levels were Hp genotype, location, and age interacting with parasite density. At low parasite densities, there was a negative correlation between Hp levels and age. At higher densities, there was a positive correlation with age. This suggests that in the presence of greater parasite-induced hemolysis, older children are capable of increased production of Hp. Sickle cell trait and ABO blood group was not associated with Hp levels in this population.