Species whose juveniles have the highest West Nile virus seroprevalence from 2002 through 2004. Line with ▴ = American Cardinal; Line with ▪ = House Sparrow; Line with ♦ = American Robin. 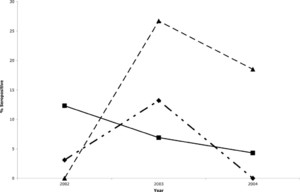 Of the 5,236 birds sampled for antibodies to West Nile virus (WNV) in Illinois from 2001 through 2004, 348 (6.6%) birds were seropositive. Our multiple year surveillance identified several avian species that had particularly high percentages of seropositive individuals. The importance of these species in the enzootic and/or epizootic transmission of WNV is discussed relative to their regional abundance and literature on host competency. The species with the highest exposure rates to WNV differed both temporally and regionally. In general, birds that bred or were born in Illinois were more likely to have antibodies than transient birds. There was also a significant difference in the seroprevalence between adults (12.1%) and juveniles (5.5%), indicating that the acquired antibody response from previous years is a critical concern when interpreting seroprevalence rates in wild-caught birds. The most common hosts for St. Louis encephalitis virus were also the most common hosts for WNV, which strongly supports the role of similar vectors for both flaviviruses. Avian species with high WNV seroprevalence rates tended to be those that bred throughout the year, have open cup nests, and live in close proximity to humans.