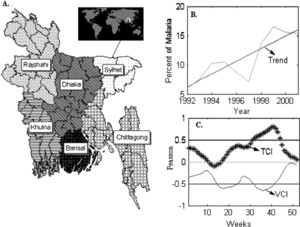 ANALYSIS OF MALARIA CASES IN BANGLADESH WITH REMOTE SENSING DATA

Epidemiologic data of malaria cases were correlated with satellite-based vegetation health (VH) indices to investigate if they can be used as proxy for monitoring malaria epidemics in Bangladesh. The VH indices were represented by the vegetation condition index (VCI) and the temperature condition index (TCI). The VCI and TCI estimate moisture and thermal conditions, respectively. Sensitivity of VCI and TCI was assessed using correlation and regression analysis. During cooler months (November–March) when mosquitoes are less active, the correlation was low. It increased considerably during the warm and wet season (April–October), reaching 0.7 for the TCI in early October and −0.66 for the VCI in mid September.