Monthly cases of diarrhea associated with Campylo-bacter, enterotoxigenic E. coli (ETEC), Shigella, rotavirus, and other enteropoathogens among children less than 6 years old brought for treatment to Abu Homos District or Benha Fever Hospital, Arab Republic of Egypt, May 2000 to May 2002. 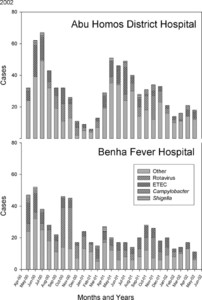