Aligned sequences from the GPI gene of representative Leishmania strains. Numbers correspond to the nucleotide sequence starting from the beginning of the L. major GPI gene (systematic name, LmjF12.0530). 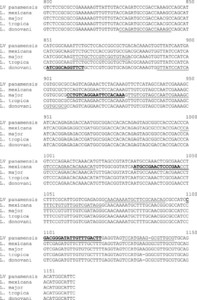 RAPID IDENTIFICATION OF LEISHMANIA COMPLEXES BY A REAL-TIME PCR ASSAY

A real-time PCR assay for the detection of four Leishmania complexes (L. Viannia, L. mexicana, L. donovani/infantum, and L. major) was developed and evaluated. The assay was developed to detect the glucosephosphate isomerase gene and capitalizes on DNA sequence variability within that gene for Leishmania complex identification. Primer/probe sets were created and tested against a panel of 21 known negative controls and on DNA extracted from cultured promastigotes or from tissue biopsies from patients with cutaneous leishmaniasis. The assay was highly specific, as no amplification products were detected in the negative control samples while simultaneously retaining a high degree of complex-specific diagnostic accuracy for cultured organisms and patient clinical samples. Real-time PCR offers rapid (within hours) identification of Leishmania to the complex level and provides a useful molecular tool to assist both epidemiologists and clinicians.