Map of 13 study villages near the city of Xichang, in Sichuan Province. Villages are shaded according to infection prevalence. Villages are labeled as (v) village ID, (e) average village eggs per gram (EPG) of stool, (s) average snail density (snails/m2), (m) average number of worms per mouse from the mouse bioassay, and (r) percent of village agriculture devoted to rice.

Relationships between human infection prevalence and intensity (a), snail density (b), average worms per mouse from the mouse bioassay (c), and proportion of agriculture that is devoted to rice (d). 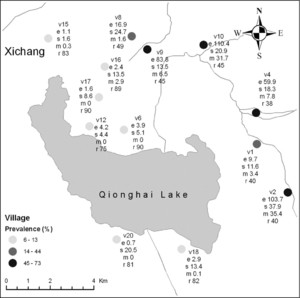 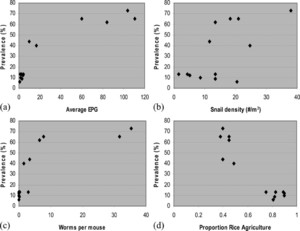 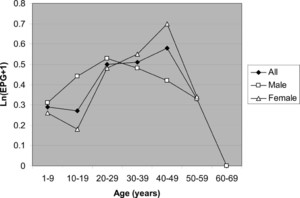 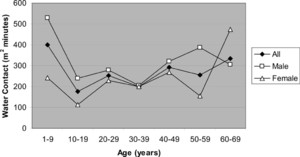 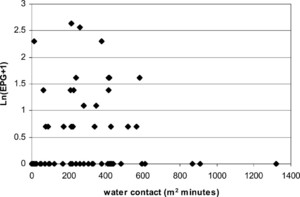 Schistosoma japonicum egg excretion and kinship relationship data from 13 endemic villages in the mountainous transmission area near Xichang, in Sichuan province, China, were analyzed via a variance components methodology to assess the relative contribution of kinship, shared household, and shared village to the risk of infection. Large intervillage differences in egg counts exist in this region due to differences in transmission potential related to environmental differences in snail density and agricultural practices. After accounting for these intervillage differences, there was no kinship or household effect on egg excretion. This reinforces earlier findings that suggest environmental factors dominate risk in this region.