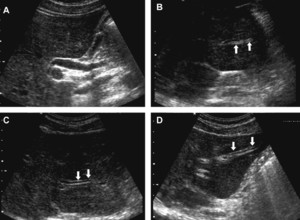 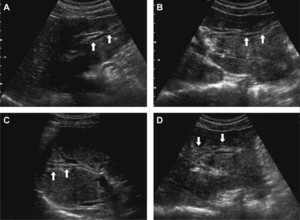 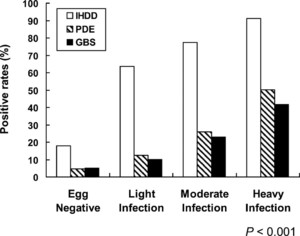 CORRELATION BETWEEN SONOGRAPHIC FINDINGS AND INFECTION INTENSITY IN CLONORCHIASIS

This prospective study was performed to evaluate the diagnostic usefulness of sonography in terms of the intensity of Clonorchis sinensis infection. Total 1,384 residents were subjected to this study at an endemic area in China, in which a clonorchiasis control program had been performed. History taking, fecal examination, and sonography were performed, and 87.8% of the subjects were found to be egg positive. Sonography showed intrahepatic bile duct dilatation (IHDD) in 68.4% of the subjects, increased periductal echogenicity (IPDE) in 24.5%, and gallbladder sludge (GBS) in 20.8%. Moreover, the grades of these sonographic findings were higher in subjects with heavier infections as determined by egg counts. IHDD was found to be the most accurate sonographic indicator of any infection degree (76.3), whereas IPDE and GBS were useful only in cases of heavy infection. Subjective symptoms were found to be only poorly correlated with sonographic findings or infection intensity.