A, Structure and nucleotide sequence of the genomic immunoglobulin-binding protein (BiP) gene of Babesia caballi. The nucleotide sequence of the intron is shown. B, Western blotting analysis. a, Native B. caballi and recombinant SfBiP expressed in insect cells and culture media using monoclonal antibody (MAb) 3B2. Lane 1, native B. caballi-infected erythrocytes; lane 2, AcBiP-infected cells; lane 3, AcBiP-infected cell culture media. b, Native B. caballi-infected erythrocytes with MAb 3B2 and mouse antibodies against SfBiP. Lane 1, MAb 3B2; lane 2, mouse antibodies against SfBiP. The sizes of the molecular mass standards in kilodaltons (kDa) are shown outside the blots. SfBiP = BiP expressed in Spodoptera frugiperda cells; AcBiP = BiP expressed in a recombinant baculovirus. 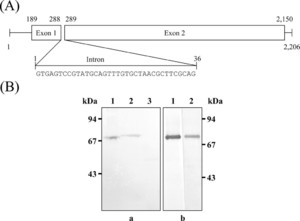 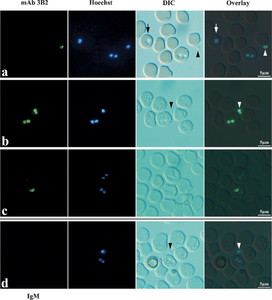 A composite 2,206 nucleotide DNA sequence encoding a putative immunoglobulin-binding protein (BiP) was constructed from a sequence obtained from Babesia caballi cDNA library clones. The 1,962 nucleotide open reading frame predicts a 72 kD protein with extensive homology with BiPs from Apicomplexa parasites. The BiP gene had a predicted N-terminal signal sequence of 18 amino acids and a C-terminal tetrapeptide sequence (Ser-Asp-Glu-Leu) for signaling in the endoplasmic reticulum lumen. The recombinant protein expressed in baculovirus showed an apparent mass of 72 kD, which is identical to that of the native B. caballi protein. Monoclonal antibodies (MAbs) against B. caballi BiP reacted strongly with extracellular merozoites, but not in early intraerythrocytic stage. Detailed observation showed that the reaction of MAbs against pear-shaped forms was markedly irregular, with either no reaction, or reaction with one or two brightly fluorescent pear-shaped forms (two parasites) of B. caballi.