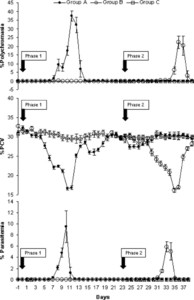 Historically, in vivo experiments of Plasmodium gallinaceum in chickens have caused high mortality. Perhaps because of this high mortality, it remains to be demonstrated whether recovered birds will resist a second episode of illness when re-exposed to infected mosquitoes. In the current study, groups of 10 chicks were infected with P. gallinaceum via mosquito bite. Parasitemia and anemia were followed by recovery in all birds, although they had persisting, low levels of parasitized erythrocytes (0.007 ± 0.019%). Twenty-three days after the initial exposure, 10 recovered chicks were rechallenged with P. gallinaceum via mosquito bite; none of them developed clinical or hematological evidence of malaria, in contrast to matched control birds, which all became diseased (P < 0.001). Unlike previous studies, the current experiment had no mortality in chickens infected with P. gallinaceum by mosquito bite. Recovered birds resisted disease from re-exposure to the same organism. The duration and nature of immunity or premunition remain to be determined.