Average age (years) and time of residence in a malaria-endemic area (years), and number of previous malaria attacks with respect to the number of recognized peptides in the exposed group. *P < 0.05 versus negative; **P < 0.05 versus one peptide. 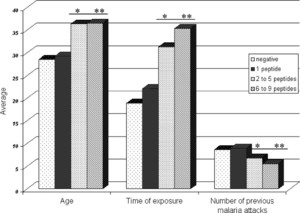 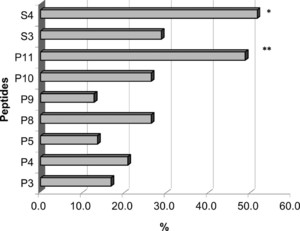 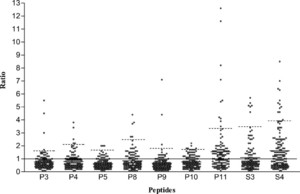 The goal of this study was to evaluate the antibody response induced by Plasmodium falciparum glutamate-rich protein (GLURP) in naturally exposed individuals from the Brazilian Amazon region (Rondonia State). The results showed that most individuals had IgG against two well-defined regions within P. falciparum GLURP, the relatively conserved N-terminal nonrepeat region (R0) and the immunodominant repeat region (R2), 67% and 79%, respectively. The peptides S4 from R2 (53%) and P11 from R0 (49%) were identified as immunodominant B cell epitopes and induced higher levels of antibodies. The number of GLURP peptides recognized and the levels of IgG against S4 and P11 peptides showed a positive correlation with age and time of exposure in the malaria-endemic area studied. The antibody responses against GLURP epitopes appear to be modulated by HLA class II antigens. Interestingly, the GLURP immunodominant B cell epitopes in individuals from a Brazilian malaria-endemic area are distinguishable from those of the African malaria-endemic area. Considering the importance of GLURP as a malaria vaccine candidate and the increasing focus on the use of subunit vaccines in the control of infectious diseases, the concern of the influence of class II allele frequencies in ethnically diverse populations may be important before vaccine trials are conducted among people naturally exposed to malaria parasites.