Allele frequencies at the 10 microsatellite loci used in the three mosquito populations. Alleles are given according to their observed size in base pairs (bp); Y axis represents the allele frequency in %. 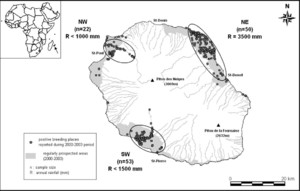 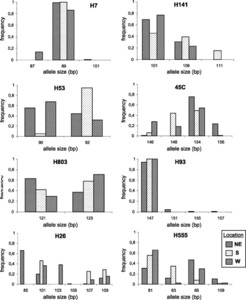 Anopheles arabiensis, together with Anopheles gambiae sensu stricto, are the most important vectors of human malaria in sub-Saharan Africa. The malaria situation keeps worsening, with 1 to 3 million deaths a year, and alternative strategies are needed to decrease malaria transmission intensity. In this paper, we studied the population structure of An. arabiensis from three sample sites on the remote Indian Ocean island of La Réunion. Our results showed strong genetic structuring between An. arabiensis populations on La Réunion, indicating the presence of barriers to gene flow. Reasons for such a high genetic differentiation are discussed, including the role of intensive control measures that have maintained reduced effective population size as well as a putative genetic adaptation to the environment. This strong structuring situation on the island represents an ideal framework for the prospect of genetic-based control trials.