Age as a risk factor for DHF/DSS or for the presence of severe clinical manifestations of dengue. The risk of presenting with DHF/DSS or shock, signs of plasma leakage, internal hemorrhage, and/or platelet count ≤ 50,000/mm3 by year of age was calculated. Bar height indicates the value of the odds ratio, and vertical bars with heavy black borders indicate P < 0.01. Infants and children ages 5–7 years old were at significant risk for severe dengue, whereas adults and adolescents 14 years and older were significantly less at risk for severe disease (OR < 0.5). The risk of presenting with any of the four severe clinical manifestations closely reflected the risk of developing DHF/DSS.

Immune response by age in children with confirmed dengue. Cases were classified as primary or secondary DEN infections, and secondary infections were plotted according to year of age. 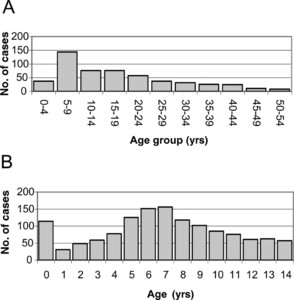 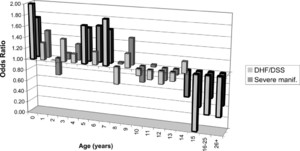 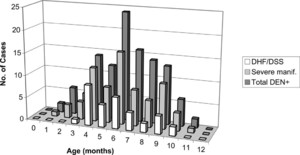 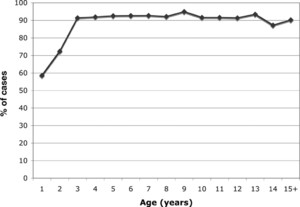 DIFFERENCES IN DENGUE SEVERITY IN INFANTS, CHILDREN, AND ADULTS IN A 3-YEAR HOSPITAL-BASED STUDY IN NICARAGUA

To investigate age-related differences in dengue severity, 114 infants, 1,211 children, and 346 adults with laboratory-confirmed dengue virus (DEN) infections presenting to three hospitals in major urban centers in Nicaragua were recruited from 1999 to 2001. The age distribution of dengue cases and the circulating serotype (predominantly DEN2) were representative of national data. Similar results were obtained when either dengue hemorrhagic fever/dengue shock syndrome or its principal manifestations (vascular permeability, internal hemorrhage, marked thrombocytopenia, and/or shock) were analyzed in relation to age and immune status. The burden of disease and of severe dengue was found predominantly in infants 4–9 months of age and in children 5–9 years old, and secondary DEN infection was a risk factor for severity in children. Age-related differences were identified in the prevalence of specific clinical manifestations as well as in their association with a confirmed DEN diagnosis. This represents one of the few comprehensive studies to analyze characteristics of dengue in infants, children, and adults in the same population and highlights age-related differences in dengue severity.