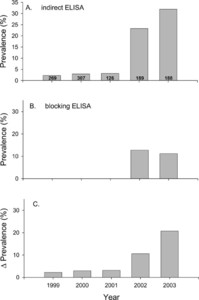 Sera from white-tailed deer (Odocoileus virginianus) were collected in Iowa during the winter months (1999–2003), 2 years before and after West Nile virus (WNV) was first reported in Iowa (2001), and were analyzed for antibodies to WNV. Samples from 1999 to 2001 were antibody negative by blocking enzyme-linked immunosorbent assay (bELISA) and plaque reduction neutralization test (PRNT90). Prevalence derived from bELISA (2002, 12.7%; 2003, 11.2%) and WNV PRNT90 (2002, 7.9%; 2003, 8.5%) assays were similar. All samples were negative for antibodies against St. Louis encephalitis virus as determined by PRNT90. Antibodies to flaviviruses were detected by indirect enzyme-linked immunosorbent assay (iELISA) prior to the first WNV cases reported in Iowa (1999–2001) with prevalence ranging from 2.2% to 3.2%, suggesting the circulation of an additional undescribed flavivirus prior to the introduction of WNV into the area. Flavivirus prevalence as determined by iELISA increased in 2002 and 2003 (23.3% and 31.9%, respectively). The increase in prevalence exceeded estimates of WNV prevalence, suggesting that conditions favored general flavivirus transmission (including WNV) during the 2002–2003 epizootic. These data indicate that serologic analysis of deer sera collected from hunter harvests may prove useful for surveillance and evidence of local transmission of WNV and other pathogens and identify white-tailed deer as a species for further studies for host competency.