Map of study area. The smaller upper map identifies Mexico. The main map represents the Yucatán Peninsula, with the states of Campeche, Yucatán, and Quintana Roo. Dots indicate the location of the villages from which field data were taken.

Collections of T. dimidiata before and after the hurricane Isidore. The total number of adults (A) and the respective larval stages (B) are shown per trimester for pre- (left bars) and posthurricane (right bars) collections. *Indicates a significant difference (P < 0.05).

Comparison of T. dimidiata collections before and after Hurricane Isidore. The total number of bugs collected in each village is shown for the indicated trimesters (A–D) for pre- and posthurricane collections. The diagonal dotted line indicates no changes in bug collections between the two periods. Only villages for which pre- and posthurricane data are available are shown. (A) N = 23 villages, (B and C) N = 34 villages, (D) N = 21 villages. Note the log scale.

Maps of T. dimidiata domestic abundance before and after Hurricane Isidore. The total number of bugs collected per village and for each trimester was interpolated for the entire Yucatán Peninsula and color-coded as indicated. Seasonal variations in bug abundance are shown for pre- (A–D) and posthurricane years (E–H). The track of Hurricane Isidore is superimposed on the maps corresponding to the year 2003 with the symbols indicating the position of the hurricane center at 6-hour intervals, starting on September 21st at 1800 UTC. 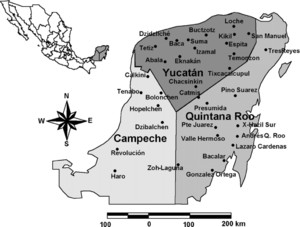 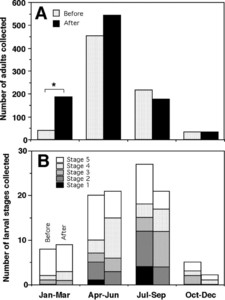 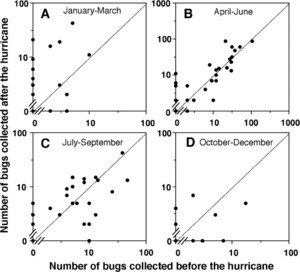 Hurricanes can have devastating effects on health and may directly modulate vector-borne diseases. Chagas disease is a zoonosis caused by the protozoan parasite Trypanosoma cruzi and transmitted by triatomine bugs, and the effect of hurricanes on these bugs is largely unknown. We thus performed a detailed study of the changes in Triatoma dimidiata geographic distribution and infection rates after Hurricane Isidore devastated the Yucatán Peninsula in September 2002. Bugs were collected in 34 villages from the entire peninsula, during a year, starting 3 months after the hurricane. Pre- and posthurricane bug collections were compared to assess changes. The most notable effect was a large increase in domestic abundance of T. dimidiata during the 6 months after the hurricane. This increase was maximum along the path of the hurricane. These results suggest that vector control programs should be implemented along the path of hurricanes to prevent an increase in Chagas disease transmission risk in the ensuing months.