Leishmania index (a) at baseline; and (b) at Day 14 after start of sitamaquine therapy for four dose cohorts for those patients with a parasitological assessment at Day 14. (Data are not available for one patient in Cohort 1 and two patients in Cohort 4 as they were withdrawn before the 14-day assessment.) A Leishmania index of 0 represents an absence of amastigotes in splenic aspirate. 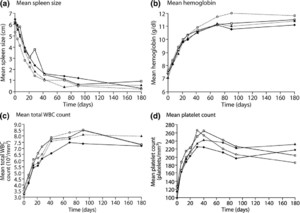 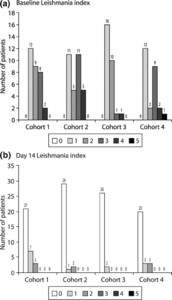