Clearance of circulating filarial antigen (CFA) by individuals in both groups as a function of pre-treatment CFA intensity (in natural log units). Symbols denote the status (0 = CFA cleared by month 24, 1 = CFA not cleared over the same time period) of each study subject. The curve is the prediction of a binary regression model indicating that the probability of not clearing CFA by individuals in this study increases significantly with their observed pre-treatment CFA levels (likelihood ratio test [versus null model of no relationship]): χ2 = 10.451, degrees of freedom [df] = 1, P = 0.0012; goodness of fit of the model: χ 2 = 1.081, df = 49, P = 0.323). The dashed vertical line indicates the mean CFA threshold below which the probability of remaining CFA positive, Pr(y = 1), < 0.50, i.e., it represents the mean CFA value below which 50% of the study population may respond to albendazole and clear CFA. This threshold mean CFA value (arrow) is estimated to be approximately 6.380 (on the natural log scale) using the following equation: exp(−b0/b1), where b0 (= −3.976) and b1 (= 0.623) represent values of the intercept and slope of the fitted regression model in the graph. Exact confidence intervals obtained using Fieller’s theorem are 3.606 and 7.440 on the natural log scale.11 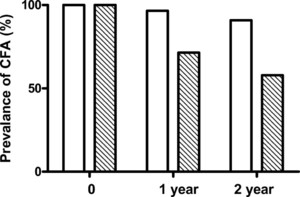 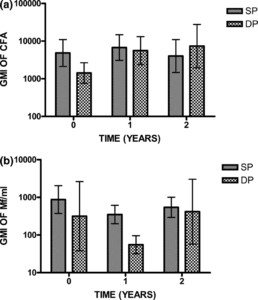 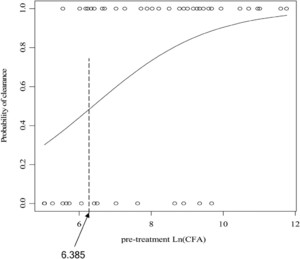 Subjects in an disease-endemic area in Orissa, India concomitantly infected with filariasis and intestinal helminths had significantly lower intensity of filarial infection in comparison with those who were infected only with filariasis. Administration of albendazole resulted in a significant decrease in the prevalence of filarial antigenemia in subjects concomitantly infected with intestinal helminths, but produced little change in this infection measure in subjects infected only with Wuchereria bancrofti. These results indicate that intestinal helminths could play a role in the anti-filarial activity of albendazole, most probably by depressing filarial infection intensity in co-infected individuals. Confirmation of these findings in a larger cohort may yield important new insights regarding the role of using albendazole in the ongoing intervention programs for the control of lymphatic filariasis.

Lymphatic filariasis causes debilitating chronic hydrocele and/or lymphedema in approximately 40 million people worldwide, whereas nearly 120 million people are infected with Wuchereria bancrofti (90%) and Brugia malayi (10%), respectively. The global initiative for filariasis control in most disease-endemic countries involves mass drug administration (MDA) of single annual dose of albendazole, a broad-spectrum anti-helminthic drug, along with the anti-filarial drug diethylcarbamazine (DEC).1 Unlike DEC, which is a potent microfilaricidal drug, albendazole has not been found to be active against circulating microfilariae, although the drug has been reported to have macrofilaricidal activity against lymphatic-dwelling adults.2,3 It is not currently clear how a single annual dose of 400 mg of albendazole mediates its anti-filarial activity because the drug is very poorly absorbed and plasma concentrations reach undetectable levels 48 hours after administration of a single dose of this drug.4 However, a major reason for including albendazole in the two-drug mass treatment of lymphatic filariasis is its potential to bring about benefits beyond filariasis to treated communities by its activity against other helminths, particularly intestinal worms, which are commonly found to co-infect individuals with filariasis in filarial-endemic communities.1

The study was conducted in Belleswarpatna, a coastal village approximately 70 km from Bhubaneswar, Orissa, India. The residents are primarily agriculture workers. Microfilariae were detected and quantified by filtration of 1 mL of nocturnal blood sample through a 3-μM polycarbonate filter, stained with Giemsa, and counted. Circulating filarial antigens (CFA) were quantified using Og4C3 assay (TropBio Pty. Ltd., Townsville, Queensland, Australia) and expressed as arbitrary antigen units as previously described.5 For serum samples showing absorbance value more than 32,000 antigen units (the maximum point of the standard curve), the actual antigen units were calculated by extrapolation on the extended standard curve. Samples with more than 100 units were considered positive for antigenemia. Samples from pre-treatment and post-treatment persons were tested together to avoid possible variations in the assay system. Intestinal helminths (hookworm, Ascaris, and Strongyloides sp.) were detected by microscopic examination of a saline-mounted stool samples without using any concentration procedure. All stool samples were examined within four hours of collection. To enhance the sensitivity of detection, a repeat stool sample was examined one week later for those subjects who had undetectable parasite eggs or ova in the first examination. Those who became positive in the repeat examination were included with subjects who were positive in the first examination. Thus, subjects who were negative in two successive examinations (one week apart) were considered negative for intestinal helminths.

A group of subjects positive for both filarial infection (CFA positive) and positive for one or more intestinal helminths and a second group of individuals infected only with W. bancrofti with no demonstrable intestinal helminths were treated with albendazole. For convenience and clarity, the two groups will be referred hereafter as double positive to denote subjects infected with both W. bancrofti and intestinal helminths and single positive to denote subjects infected only with W. bancrofti. A single dose of 400 mg of albendazole was administered at six monthly intervals to both the groups of subjects, and microfilaria, CFA, and presence of intestinal helminths were scored at 12 and 24 months. Twenty-one double-positive and 31 single-positive subjects were treated and their data were used for comparisons. The median age of the double-positive group was 30 years (range = 15–60) and 5 of 21 were females. The median age of single-positive group was 28 years (range = 10–55) and 11 of 31 were females. There was no statistically significant difference between the mean ages of subjects in the two groups. All 52 cases were residents of the same village and their residences were distributed in the village with no specific clustering in any given location. Informed consent was obtained from the study subjects and the project was reviewed and approved by the Institutional Ethical Committee of the Regional Medical Research Center in Bhubaneswar.

Analysis of the effect of treatment was carried out using both univariate and multivariate analysis. With regard to the univariate analyses, differences in mean intensity of both microfilarial and CFA units (at the geometric mean scale) between treatment groups were compared at each time point using the non-parametric two-tailed Mann-Whitney U test (for geometric mean data) and the chi-square test for prevalence data. Fischer’s exact test was applied as appropriate when group sample sizes were ≤ 5. The effect of treatment with albendazole on changes in the levels of both microfilaria and CFA with time and prevalence of CFA was also assessed using a repeated measures generalized linear models framework, either with the generalized estimating equations (GEEs) approach for dealing with prevalence data,6,7 or with the linear mixed effects model formulation for dealing with log-transformed intensity data.8 Since initial pre-treatment infection intensities of individuals differed between the treatment groups (Table 1), all longitudinal analyses were conducted taking into account this difference in pre-treatment infection measures.

Comparison of absolute antigenemia units, which is considered an approximate measure of adult worm load in the human host, showed no significant shift in the single-positive subjects over the 24-month observation period (Figure 2a) in comparison with pre-treatment levels. However, in the double-positive group, in which 42.11% had cleared antigenemia, in the remaining 57.89% of the subjects, the CFA units increased significantly, a shift from a geometric mean index (GMI) of 1,421 units to 7,379 units (P < 0.015, by two-tailed Mann-Whitney U test) (Figure 2a). The CFA levels in the double-positive group at 24 months were comparable with the GMI of 4,012 units observed in the single-positive group. This indicates the possible further acquisition of filarial infection in this group at 24 months (Table 1). It is important to note that following treatment with albendazole the double-positive subjects became single-positive subjects because all had cleared intestinal helminths. As a result, when the CFA levels were evaluated using the repeated measures Gaussian errors linear mixed effects model, no significant difference was obtained in the rates of change in antigenemia density between the two groups (F = 0.89, degrees of freedom [df] = 1.43, P = 0.37) (Figure 2a) at 24 months post-treatment.

Analysis of microfilarial density also indicated a significant decrease in the double-positive group at 12 months post-treatment, but levels were comparable between the two groups at 24 months (i.e., a significant group by time interaction was obtained; F = 6.89, df = 1.44, P = 0.01) (Table 1 and Figure 2b). This could have been due to comparable levels of CFA between the two groups at this time point.

Concomitant parasitism with intestinal helminths (double-positive) leads to lower intensities of filarial infections in human hosts and treatment with albendazole decreases prevalence of filarial infections in a significant proportion of such subjects. However, those who fail to clear antigenemia can acquire higher infection levels (Table 1 and Figure 2) comparable to the single-positive group because they are now free of intestinal helminths. This also explains the apparent paradoxical observation of filaricidal activity of albendazole in the two cohorts of subjects scored at 12 and 24 months post-treatment. The observation that the macrofilaricidal activity of albendazole was demonstrable only in double-positive subjects with relatively lower antigenemia and not in those in the same group with higher infection load suggests that the drug can clear infection only when the intensity of infection is low in the host. This finding is to be expected with drugs demonstrating low potency against a particular infection. Such drugs would appear to clear infection more rapidly in patients with lower infection intensity compared with patients with higher infection intensity (even if they have the same level of potency against individual parasites in both groups). This is largely the result of the differential effect of drug treatment on prevalence, as opposed to intensity of infection, an outcome that derives essentially from the occurrence of a typical nonlinear relationship between these infection variables in helminth infections.9 A binary logistic regression model of the data (from both groups) examining the relationship between pre-treatment CFA levels in individuals and the probability of clearing CFA suggests the occurrence of a threshold mean CFA value (approximately 6.38 in natural logs or approximately 591 antigen units; (95% confidence interval = 36.82–1,702.75 units), below which greater than 50% of the study population may clear CFA with albendazole (Figure 3). Clearly, since there are more patients below this threshold in the double-positive group (63.63% versus 21.87% in the single-positive group), a higher clearance of CFA is observed in this group compared with the single-positive group.

Intensity of infection in the two study groups*