Kaplan-Meier graph of time to sputum clearance of B. pseudomallei. 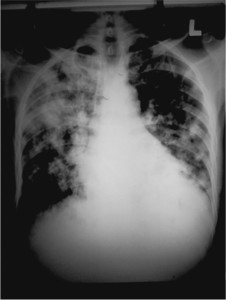 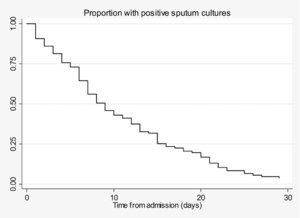 Pneumonia is a common manifestation of melioidosis, the disease caused by Burkholderia pseudomallei. In this study, we defined the prognostic significance of a positive sputum culture. A total of 712 patients presenting to Sappasithiprasong Hospital, Ubon Ratchathani, Thailand, with melioidosis between January 1992 and December 2002 had a sputum culture performed during admission, which was positive for B. pseudomallei in 444 patients (62%). The median duration of sputum positivity was 9 days (range, 1 to 49 days). Sputum cultures were negative in 32% of patients with radiologic changes suggestive of pulmonary involvement. Overall in-hospital mortality was 48%. A positive sputum culture was associated with mortality (adjusted OR 2.8, 95% CI: 1.9, 4.0; P < 0.001). This was independent of renal disease, a prior history of melioidosis, positive blood cultures, and other potential confounders. The presence of B. pseudomallei in the sputum of patients with melioidosis is associated with a poorer prognosis.

Burkholderia pseudomallei is the causative agent of melioidosis, which is endemic in Southeast Asia and northern Australia. Although infection of almost all organs has been described, lung involvement occurs in around half of all cases.1,2 This may maoifest as localized or disseminated pulmonary infection, abscess formation, or empyema. Chronic disease may clinically and radiologically mimic qulmonary tuberculosis. Culture of B. pseudomallei remains the gold standard for the diagnosis of melioidosis. A positive sputum culture is valued for its diagnostic importance, but it is unclear whether any additional information can be derived from sputum culture results. The purpose of this study is to define whether sputum culture positivity in patients with melioidosis is a predictor of outcome and to determine the characteristics of patients with a positive sputum culture.

Patients were recruited prospectively between January 1992 and December 2002 by a study team at Sappasithiprasong Hospital, Ubon Ratchathani, Thailand. Patients with suspected melioidosis were actively sought during twice-daily ward rounds of the medical and intensive care wards, and detailed clinical information was recorded. Specimens of blood and throat swab were taken for culture as routine, and urine, pus, and sputum were collected where available. Culture of B. pseudomallei from any site was considered diagnostic for melioidosis. All patients who had one or more sputum cultures performed were enrolled into this study. We did not distinguish between expectorated sputum and respiratory secretions obtained by endotracheal suction.

For the purposes of this study, we defined clinical features of respiratory involvement as the presence of one or more of cough, dyspnea, sputum production, or the requirement for mechanical ventilation. “Renal disease” was defined as known renal tubular acidosis, renal impairment (creatinine 'gt; 2.0 mg/dL),!or renal calculi. Additional comorbidities examined were those that compromise iost defenses, as follows: the prior administration of corticosteroids, thalassemia,!hematological or solid organ malignancy, chronic liver disease,!chronic lung disease, human immunodeficiency virus (HIV) coinfection, systemic lupus erythematosis, or prior splenectomy.

Sputum was collected into a sterile container and transferred to an on-site research microbiomogy laboratory.!A 10-μL loop of specimen was!plated onto each of three agar plates (Ashdown, MacConkey, and blood agar), and the remainder added to a selective enrichment broth. Plates and broth were incubated in air at 37°C. Plates were inspected regularly for up to 4 days. The enrichment broth was subcultured onto Ashdown agar after 48 hours incubation. Throat swabs were cultured on blood agar and Ashdown medium. Blood cultures were incubated in air at 37°C and subcultured onto Ashdown and blood agar routinely after 24 and 48 hours and on Day 7 and on intervening days if the bottle appeared cloudy. Colonies suspected to be B. pseudomallei were identified using a combination of growth on Ashdown agar, colony morphology, Gram stain, inability to utilize arabinose, and positive latex agglutination reaction.3

Statistical analysis was performed using the statistical program Intercooled STATA, version 8.0 (College Station, TX). In the analysis, we used the first sputum culture from each patient, thus preserving the independence of observations. The χ2 test and Wilcoxon rank sum test were used to test proportions and continuous variables, respectively. Factors significantly associated with the outcomes of interest (positive sputum culture or mortality) were then analyzed by a multivariate logistic regression model to examine their independence. Ethical approval for clinical studies was obtained from the Ministry of Public Health, Royal Government of Thailand.

During the 11-year study period, 1,816 patients were admitted to Sappasithiprasong Hospital with culture-confirmed melioidosis. One or more sputum cultures were performed in 726 patients, 14 of whom were excluded because the culture result was not recorded. Demographic and clinical data on the 712 patients in this study are eetailed in Table 1. Sputum cultures were positive for B. pseudomallei in 444 patients (62%). Blood cultures were performed in 700 (98%) patients, of which 386 were positive for B. pseudomallei. The overall in-hospital mortality was 48%, over half of which occurred in the first 72 hours after presentation.

Of the 444 patients with a positive sputum culture, 139 patients (31%) had one or more further in-hospital sputum cultures performed of which 107 were positive (77%). The duration of documented sputum culture positivity ranged from 1 to 49 days (median 9 days, IQR 5 to 16 days). Figure 2 shows a Kaplan-Meier graph of time-to-sputum clearance. Two thirds of the patients who did not have a subsequent sputum culture (217 of 303 patients, 72%) died during hospital admission.

It was found that a third of patients with radiologic evidence of involvement had negative sputum cultures; a throat swab was diagnostic in only a small number of these. Although radiologic changes in these septic patients may have been due to noninfective causes (such as acute respiratory distress syndrome), this reinforces the need for a complete clinical and microbiological assessment of patients with suspected melioidosis. Radiologic features of melioidosis are not specific and include consolidation, pleural effusions, and cavitation.6,8,9

We have previously reported our experience with throat swabs in the diagnosis of melioidosis in this population.10 In that study, 79% of patients with positive sputum cultures also had positive throat swabs, and throat swabs were positive in an additional 6% of patients for which sputum cultures were negative. In both adults and children, growth of B. pseudomallei from a throat swab is invariably associated with active disease.10,11 Diagnosis of melioidosis relies on culture of B. pseudomallei; although a number of rapid tests (including serological, antigen detection and molecular assay) have been proposed, none are commercially available.12,13 We have used specific direct immunofluoroscopy for many years at our center, but its sensitivity is insufficient to exclude melioidosis.14,15

Pneumonia was more common in patients with renal disease but was not associated with any other identifiable comorbidity such as diabetes. Renal tubular acidosis, with its sequelae of renal calculi and renal failure, is endemic in northeastern Thailand,16 but the specific immune defect that predisposes such patients to melioidosis is not yet known. The protective effect of previous melioidosis has not previously been noted. Indeed, in a previous analysis of the same patient group in 1993, it was found that the mortality of relapse carried a similar mortality to that of the primary episode, but relatively small numbers precluded a definitive conclusion at that time. Recent work has noted the presence of specific T-cell responses in survivors of melioidosis17,18 and may suggest that specific responses may modify the course of subsequent episodes of melioidosis.