Number of malaria cases of each group, reported at 10-day intervals, from 2001 through 2003 in the Republic of Korea. 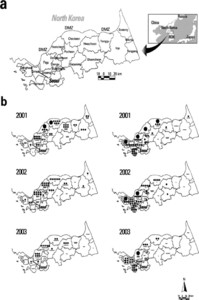 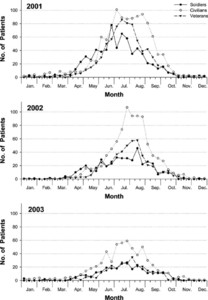 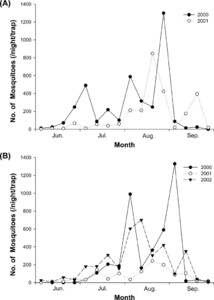 The Republic of Korea experienced a re-emergence of Plasmodium vivax malaria in 1993. The incidence of this disease increased rapidly through 2000 with its geographic distribution expanding from the vicinity near the Demilitarized Zone to the adjacent outlying areas. However, the number of cases of P. vivax malaria since that time period has decreased. A total of 2,538 cases occurred in 2001, and this decreased to 1,761 cases and 1,164 cases in the two subsequent years. A total of 5,463 cases of P. vivax malaria were reported from 2001 through 2003; 25.26% (1,380) were reported among Republic of Korea military personnel, 27.48% (1,501) were among veterans who had been discharged from the military within two years, and 47.26% (2,582) were among the civilian population. Mosquito control activities by the North Korean and South Korean governments, chemoprophylaxis of Republic of Korea Army personnel, and the low level of Anopheles mosquitoes in 2001 may have been factors responsible for the decreasing number of malaria cases. However, local transmission might have taken place in urban regions of the malaria-risk areas that are within 30 km south of the Demilitarized Zone. Extensive intervention and continued surveillance are warranted to prevent the epidemic from re-expanding and to eliminate this disease in the Republic of Korea.

Plasmodium vivax malaria has recently become a major public health threat affecting both the civilian and military communities in the areas near the Demilitarized Zone (DMZ). Since its re-emergence in 1993, the annual incidence of P. vivax malaria has increased rapidly, mostly among the military personnel and veterans in border areas and reached 4,142 cases in 2000.6 During this period, the geographic distribution of malaria expanded southward from the DMZ to the counties bordering Seoul.6 In addition to a rapid increase in the military, similar increase in malaria cases were observed among civilians, and the time of occurrence of the first case of malaria with a short incubation period was becoming earlier during this period.6

The current re-emergence of P. vivax malaria might be the result of infected mosquitoes originating from North Korea near the DMZ.7,8 North Korea, which denied the existence of P. vivax malaria prior to the government’s official acknowledgment of the disease in 1999, has been receiving money and supplies to control P. vivax malaria since 2000. In the Republic of Korea, the number of soldiers during their terms of service in the malaria-risk areas who have received chloroquine and terminal primaquine chemoprophylaxis has been increasing steadily, and the duration of chemoprophylaxis has been extended from 16 weeks in 1997 to 22 weeks since 2001.9 In this study, we evaluated the epidemiologic characteristics, i.e., the number of cases of each group, the geographic distribution of these cases and their monthly and annual incidence, and the number of Anopheles mosquitoes, to analyze the nature of malaria infection in the Republic of Korea from 2001 through 2003.

Malaria is one of the group III communicable diseases that exist in the Republic of Korea. The Division of Communicable Diseases Information and Surveillance at the Korea Center for Disease Control and Prevention (Seoul, Republic of Korea) collects data on all cases among civilians and veterans, and all the cases occurring in military personnel must be reported to the Office of the Surgeon General at the Army Headquarters. All P. vivax malaria cases are also reported to the Ministry of Health and Welfare. The case definition of malaria includes any febrile illness in which P. vivax parasites have been demonstrated in peripheral blood smears.1,10 Cases among military veterans were defined as those personnel who 1) had a malaria attack within 24 months after discharge from military service, and 2) had been stationed in area at risk for malaria.

The annual geographic distribution of malaria in Republic of Korea military personnel, civilians and veterans was determined by the location where they lived or where they were stationed when the diagnosis was made. The seasonal incidence was analyzed by grouping cases according to 10-day intervals.

Light traps were used to collect mosquitoes in the high-risk areas during the malaria transmission season. Trapping was conducted once a week between 7:00 pm Monday and 6:00 am Tuesday from June through September.

A total of 5,463 cases of P. vivax malaria occurred from January 1, 2001 through December 31, 2003 (Table 1). Of these cases, 25.26% (1,380) were reported among military personnel, 27.48% (1,501) were reported among veterans who served in malaria-risk areas, and 47.26% (2,582) were reported among civilians. During this period, the annual incidence of malaria constantly decreased every year, and the incidence of disease was 54% less in 2003 than that in 2001. There was a greater reduction in the percentage of cases among soldiers and veterans than among civilians. The proportion of civilians among the total cases increased persistently during this period, reaching more than half of the total cases in 2003. Conversely, the number of cases of soldiers and veterans was less than one fourth of the total cases in 2003.

Most of the malaria cases were diagnosed from June through September, with a unimodal peak in July and August (Figure 2). Unlike the civilians, in the military populations, the malaria incidence temporarily decreased in mid-June after chloroquine chemoprophylaxis was initiated. The 10-day incidence peak also decreased every year, and it finally decreased to less than 60 cases in 2003.

Plasmodium vivax malaria has decreased in many parts of the high-risk area during this same period. In 2001, the number of cases among soldiers decreased to less than half of those in 2000 in almost every part of the malaria-risk areas.6 However, the geographic distribution of malaria cases had expanded. In Yanggu and Inje Counties, where there are sections of the Taebaeck mountain range, the number of cases increased 2–3-fold in 2001. Moreover, in the same year, soldiers in Yangpyeong, Hongcheon, Yeoju and Hoengseong counties were infected by malaria. These areas are adjacent to the southeastern parts of the malaria-risk areas and malaria cases had never been reported in these areas before 2000. In 2002, malaria cases in military personnel were also observed in Yeoju and Hoengseong Counties. Thus, the geographic distribution had been expanding in a southeast direction.

The annual number of cases of P. vivax malaria among civilians have showed a pattern similar to that of the soldiers. Cases among civilians in the eastern and central parts of the malaria-risk areas decreased sharply, but in the counties in the western parts, such as Goyang, Gimpo and Paju counties, the number of cases showed a smaller decrease. Even if malaria infection had spread southward since 1997, most of the cases were among the Republic of Korea military personnel stationed near the DMZ since the re-emergence in 1993, and the civilians cases in the malaria-risk areas lived south of the military establishments.6 The decreased number of malaria cases among civilians that occurred to a lesser extent than in military personnel means that local transmission actively took place in the southern side of the area in which soldiers were stationed along the DMZ during this period. These areas are different from the other parts of malaria-risk areas, which are rural areas. In these counties, urbanization has been under way and the population densities are higher than those in other counties in the malaria-risk areas. Therefore, special attention should be paid to prevent focal epidemics in these areas.

The markedly low level of Anopheles mosquitoes in 2001 was attributed to the abnormally dry weather conditions. In 2001, a drought had continued for more than four months until late June and the relative humidity was far lower than the average relative humidity during the last 30 years. These conditions might have inhibited the formation of water pools that are a prerequisite for the growth of the larvae of the mosquitoes, and this resulted in a low level of mosquitoes. We believe that this factor was also responsible for the large reduction in malaria cases in 2001.

In conclusion, our study has demonstrated that the number of cases of P. vivax malaria has decreased annually from 2001 through 2003. Control activities in North Korea, chemoprophylaxis in the Republic of Korea army, and the low level of Anopheles mosquitoes in 2001 may have been responsible for the decreasing number of cases that were reported during this period. The number of cases among civilians was approximately half of the total cases during this period, which was different from the situation before 2000. In spite of the decrease of total cases, a large number of cases still occurred in the urban areas of the malaria-risk areas more than 30 km south of the DMZ. Continued intervention and surveillance are warranted to prevent the malaria infection from re-expanding and also to help eliminate this disease in the Republic of Korea.