Comparision of receiver operating characteristics of pigmented leukocytes for prediction of severe malaria. 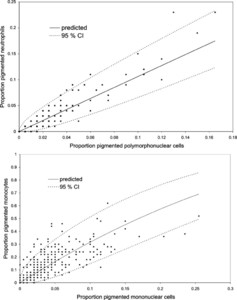 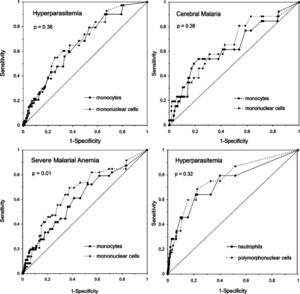 ASSESSMENT OF A SIMPLIFIED METHOD FOR COUNTING LEUKOCYTIC MALARIA PIGMENT

Severe and fatal malaria is associated with the increased presence of malaria hemozoin in peripheral phagocytes. Large studies of this relationship are hampered by the fact that identifying and counting phagocytes on thick blood smears is time consuming. Distinguishing which mononuclear cells are monocytes and which granulocytes are neutrophils requires time and careful training. In this study, we evaluated a simplified method in which only the proportions of hemozoin-containing mononuclear cells and granulocytes are counted. Thick blood films from 471 Gabonese children with malaria were evaluated. We found a linear relationship and a strong correlation between the proportions of hemozoin-containing monocytes versus mononuclear cells (r = 0.85) and neutrophils versus polymorphonuclear cells (r = 0.93), respectively. The two methods had similar predictive values, as estimated by receiver operating characteristics curves. This simplified method can be used to estimate the amount of extra-erythrocytic pigment in peripheral blood, and we suggest that it may be particularly suitable for very large studies.

Although peripheral parasitemia generally correlates with disease severity in individuals infected with Plasmodium falciparum, the association is not strong enough to be useful in directing the treatment of individual patients. Erythrocytes containing mature P. falciparum trophozoites sequester in the microvasculature of various organs; for this reason, the peripheral parasitemia represents an unknown proportion of the total parasite burden in any given patient. A single measure of peripheral parasitemia, e.g., at the time of admission, is not a reliable enough marker to identify patients at high risk of a poor outcome.1

Malaria parasites grow and divide asexually within human red blood cells and this process is supported by the systematic digestion of hemoglobin. Malaria pigment (hemozoin) is the end product of this digestive process, during which the potentially toxic heme moiety is transformed into an insoluble polymer. When malaria parasites (schizonts/meronts) mature and rupture the host red blood cells, merozoites (the next generation of malaria parasites) are released, along with red blood cell contents, including malaria pigment. An unknown proportion of this free pigment is phagocytosed by scavenger neutrophils and monocytes; the rest is taken up by tissue macrophages to the extent that various tissues (brain, liver, spleen) are grossly discolored.2,3 Neutrophils have a half-life of approximately seven hours, and are thus likely to be markers of recent pigment phagocytosis. Monocytes are longer lived, and the pigment contained therein reflects a more protracted time course.4

Quantifying malarial pigment in peripheral blood can be done using thick or thin blood films. The morphology of various white blood cells is more readily observed on a thin film, but many more fields must be examined to assess a representative number of monocytes and neutrophils. We evaluated a method of assessing pigment using thick blood films, and quantifying pigment-containing mononuclear cells and polymorphonuclear cells, and compared the results to those made using the traditional method, in which monocytes and neutrophils are identified, and the associated pigment is quantified.

The study was part of a series of studies within the “Severe Malaria in African Children” network, which aim to evaluate interventions to reduce malaria mortality in various sites throughout Africa. The study took place in the Albert Schweitzer Hospital in Lambaréné, Gabon, an area of moderate to high malaria transmission.9,10

Between December 2000 and January 2002, all children with asexual P. falciparum parasitemia admitted to the pediatric ward were eligible for enrollment. The study was reviewed and approved by the ethical review committees of the International Foundation of the Albert Schweitzer Hospital, Michigan State University, and the International Center for Infectious Diseases Research protocol review committee within the National Institute of Allergy and Infectious Diseases, U.S. National Institutes of Health. Informed consent was obtained from parents/guardians of all participants before enrollment.

Thick blood films were stained for 15 minutes using 20% Giemsa stain. This preparation is suitable for counting both peripheral parasitemia and pigmented leukocytes on the same slide (Missinou MA, unpublished data). On each thick blood film, 100 monocytes, 200 mononuclear leukocytes, 100 neutrophils, and 200 polymorphonuclear cells were examined for malaria pigment, and expressed in proportions of the respective cell type. One observer made all of the observations of a single slide. Parasitemia (parasites per microliter) was quantified by counting the number of parasites per microscopic field from a defined volume of blood (10 μL) spread on a defined area (1.8 cm2).11

Since the measurements for the pigment counts were highly skewed, the relationship between the proportion of pigmented monocytes and neutrophils and pigmented mono-nuclear and polymorphonuclear cells was assessed after arc-sine square root transformation. Linear regression using the transformed mononuclear and polymorphonuclear cells to predict the monocytes and neutrophils was done using these transformed proportions and the root mean square error was used to calculate the 95% confidence intervals.

The agreement between the ability of pigmented monocytes and mononuclear cells to predict cerebral malaria, severe malarial anemia, and hyperparasitemia was assessed by comparing the areas under the receiver operating characteristic (ROC) curve for different diagnostic tests applied to the same sample.12 A P value < 0.05 was considered significant.

Identifying children who are at a high risk of dying when they initially present with malaria is an important step in reducing malaria mortality in Africa. To be useful in disease-endemic areas, a measure should be simple, inexpensive, and easy to implement. The amount of malaria pigment in peripheral leukocytes has the potential to be such a measure, but a simplified counting procedure would increase its utility. Here, we evaluated a simpler method to measure peripheral pigment load by counting pigmented mononuclear cells rather than pigmented monocytes and pigmented polymorphonuclear cells rather than pigmented neutrophils. The simplified method requires 10 minutes; the traditional approach needs 30 minutes. An additional advantage is that all counts in the simplified method can be made on the same slide as the thick blood smear.

The present study confirms the association between pigmented leukocytes and severity of malaria. It also corroborates the hypothesis that pigmented phagocytes with long half-lives (i.e., monocytes) are better markers for cerebral malaria and severe malarial anemia than are phagocytes with short half-lives. Peripheral parasitemia, in contrast, is more strongly correlated with pigment-containing neutrophils than with pigment-containing monocytes.5,13 These findings are consistent with some4,8 but not all previous studies.7

In our study, the capacity of the two methods to identify patients with more severe forms of malaria, assessed via ROC curves, was similar and not particularly high. Larger populations, including a significant number of fatal outcomes, are required to assess these measures as outcome predictors.

Characteristics of patients on admission