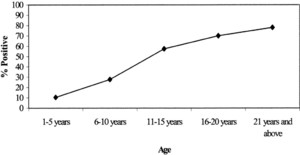 In this multicenter study in Lebanon, hepatitis A virus (HAV) seroprevalence rates were surveyed by age, gender, and socioeconomic factors. Blood samples collected from 606 subjects aged 1 to 30 years were analyzed for anti-HAV IgG. Age was the most important factor influencing HAV seroprevalence. HAV seroprevalence rates in the current study were about 78% in the ≥ 21 years age group, 28% in the 6–10 years age group, and 11% in the 1–5 years age group as compared with 97.7% in adults, 85% in children aged 6–12 years, and 40% in children aged 1 to 5 years in previous studies, demonstrating a shift in HAV seroprevalence from the younger to the higher age groups. In light of the severity of the disease in adults and availability of safe and effective vaccines against HAV infection, introduction of HAV vaccination into the national immunization schedule of Lebanon should be considered.