A and B, Ulceration of the tips of the second and third fingers (white arrows) due to median neuropathy. C, Atrophy of flexor carpi ulnaris (black arrows) and brachioradialis muscles (arrowheads). 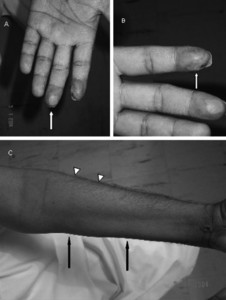 COMPARTMENT SYNDROME: AN UNUSUAL COURSE FOR A RARE DISEASE

We report a case of compartment syndrome of the left upper limb following hemorrhage due to Crimean-Congo hemorrhagic fever in a 45-year-old man. As far as we know, there is not such a report in the literature. We discuss clinical manifestations, electrophysiologic findings, differential diagnosis, and management of the patient. A high degree of awareness for an early diagnosis may participate to improve the poor prognosis.