Study population in Zhengding County, Hebei Province, People’s Republic of China with diarrhea who presented in 2002 for treatment.

Seasonal distribution of diarrhea, dysentery, and shigellosis in Zhengding, Hebei Province, People’s Republic of China, 2002. This figure appears in color at www.ajtmh.org.

Relationship between temperature, rainfall, and shigellosis incidence rate in Zhengding, Hebei Province, People’s Republic of China, 2002. This figure appears in color at www.ajtmh.org. 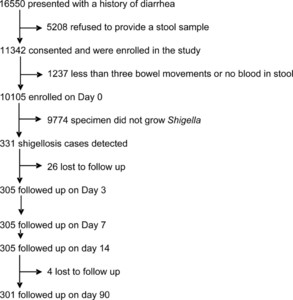 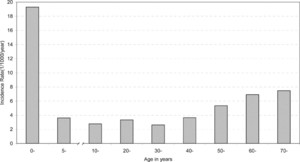 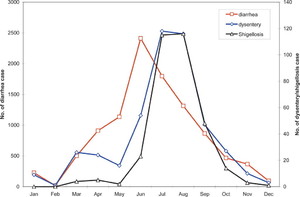 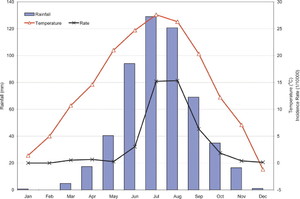 OCCURRENCE OF SHIGELLOSIS IN THE YOUNG AND ELDERLY IN RURAL CHINA: RESULTS OF A 12-MONTH POPULATION-BASED SURVEILLANCE STUDY

In 2002, population- and treatment center–based surveillance was used to study the disease burden of shigellosis in rural Hebei Province in the People’s Republic of China. A total of 10,105 children with diarrhea or dysentery were enrolled. Infants were treated most frequently for diarrhea (1,388/1,000/year) followed by children ≤ 5 years old (618/1,000/year). Shigellosis was treated most often in children 3–4 years old (32/1,000/year) and people > 60 years of age (7/1,000/year). Fifty-six percent (184 of 331) Shigella isolates were detected in patients who had non-bloody diarrhea. Shigella flexneri was identified in 93% of 306 isolates. The most common S. flexneri serotypes were 1a (34%), X (33%), and 2a (28%). More than 90% of the Shigella isolates were resistant to cotrimoxazole and nalidixic acid, but remained susceptible to ciprofloxacin, norfloxacin, and gentamicin. Widespread resistance to antibiotics adds urgency to the development and use of vaccines to control shigellosis.