Regional hospitals participating in the sentinel surveillance network for priority diseases in Egypt, 1999–2003.

Monthly distribution of patients with probable or confirmed typhoid fever among hospitals in Egypt that conducted surveillance throughout the study period (1999–2003).

Monthly distribution of patients with brucellosis among hospitals in Egypt that participated in the surveillance project throughout the study period (1999–2003). 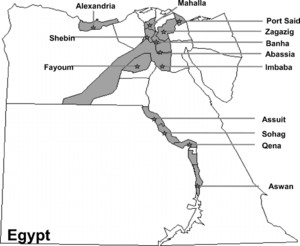 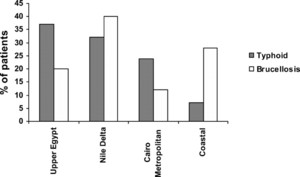 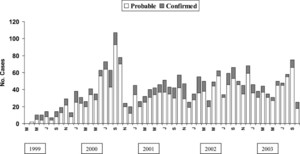 Acute febrile illness (AFI) is a common syndrome in Egypt. However its etiologies are not well characterized. To determine the relative frequency of pathogen etiologies and possibly improve diagnostic, clinical management and public health measures, we implemented laboratory-based surveillance in a network of infectious disease hospitals throughout Egypt. Admitted patients with AFI provided background details and a blood sample for bacterial culture and serologic analysis. Case definitions were based on laboratory results. Of 10,130 patients evaluated between 1999 and 2003, 5% were culture positive for Salmonella enterica serogroup Typhi, 3% for Brucella, and 2% for other pathogens. An additional 18% of patients had positive serologic results for typhoid and 11% for brucellosis. Risk factor analysis identified availability of municipal water to be significantly (P < 0.05) associated with protection against typhoid. Animal contact and consumption of raw dairy products were significantly associated with brucellosis. The surveillance network identified typhoid fever and brucellosis as the most common bacterial causes of AFI in Egypt, allowed better description of their epidemiology, and may lead to the development of targeted prevention strategies.