Seasonal variation in the relative abundance of flies at the Agbokim Waterfalls and Afi River in Nigeria.

Diurnal biting activity of adult Simulium damnosum at the Agbokim Waterfalls and Afi River in Nigeria, showing the bimodal peaks. 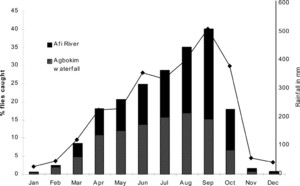 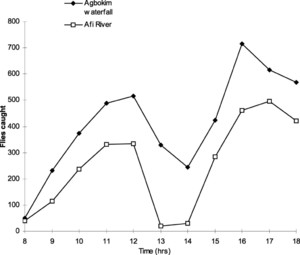 In the Lower Cross River basin in Nigeria, no pre-control entomologic profile of Onchocerca volvulus infection in the local Simulium damnosum population was available prior to the initiation of an ivermectin control program in 1995. A longitudinal entomologic study was therefore carried out over a 12-month period (January–December 2001) at the Agbokim waterfalls and Afi River, which are breeding sites of S. damnosum in the river basin. A total of 9,287 adult S. damnosum were caught on human bait; 9,048 (97.43%) were dissected, of which 313 (3.46%) were infected. Annual biting rates (ABRs) of 42,419 and 28,346 bites per persons per year were recorded at the Agbokim Waterfalls and Afi River, respectively. The annual transmission potential (ATP) was 419 infective larvae per person per year at the Agbokim Waterfalls and 427 at the Afi River. Monthly biting rate and monthly transmission potential varied significantly (P < 0.05) at the two sites. Transmission was highly seasonal from April to September, corresponding to the peak biting period of the vector. The high ATP and ABR values are a measure of the mesoendemicity of onchocerciasis in the river basin. There was a significant F0.05 (1, 10) (P < 0.05) variation in the relative fly abundance from both sites. It was observed that human activities such as farming, fishing, timber cutting, and hunting are done in the early morning and late afternoon, which corresponds to the peak diurnal biting period of the vector. Changes in these practices and attitudes may markedly affect the disease intensity and transmission.