The well-circumscribed calcified mass shown in the lower inner quadrant of the left breast. 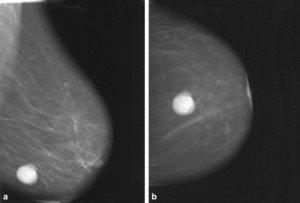 Breast masses secondary to hydatid cyst disease are placed on the differential diagnosis of breast tumors under guidance of the literature. In addition to their characteristic appearance on mammography, many specific parameters for diagnosis are required. In this report, the relation of serum CA 19-9 levels to the primary breast cyst hydatid was evaluated in both preoperative and postoperative periods.